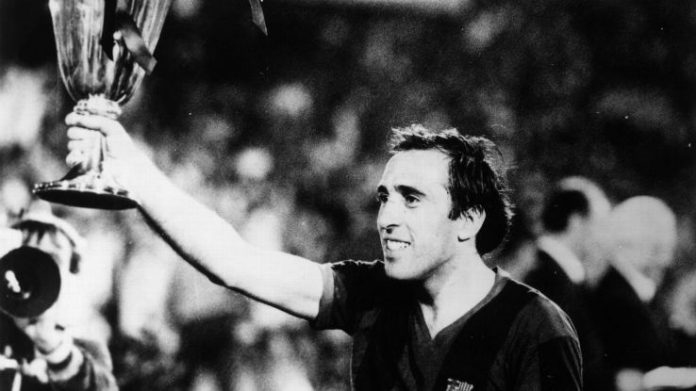 On this day in 1979, Barcelona beat German Bundesliga side Fortuna Dusseldorf 4-3 at extra time to win the European Cup Winners’ Cup.

Played in front of 58,000 fans at the St. Jakob Stadium in Basel, Switzerland, the game began in electrifying fashion with Tente Sanchez and Thomas Allofs both scoring for their respective teams inside the first ten minutes.

Barcelona took the lead again through Juan Manuel Asensi in the 34th minute before Dusseldorf striker Wolfgang Seel equalised seven minutes later to make it 2-2 at half time.

The scores remained tied at the end of 90 minutes forcing extra time. Goals from Carles Rexach and Hans Krankl made it 4-2 for Barca. Seel added another for the Germans but it was too little too late as Barca held on to their slender lead until the end of extra time to lift the Cup Winners’ Cup.

On this day in 1998, Heart of Midlothian won the Scottish Cup by beating Rangers 2-1 in the final.

Played at Celtic Park, Hearts won a penalty inside the first minute. The spot kick was deftly dispatched by midfielder Colin Cameron to put Hearts ahead.

The Edinburgh side doubled their lead in the 52nd minute through a Stephane Adam strike. Ally McCoist who came on as a sub at the start of the second half pulled a goal back for Rangers in the 81st minute but Hearts held on to their lead to record a memorable win.