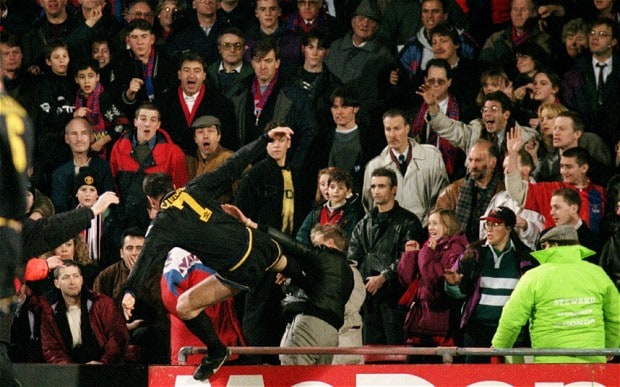 On this day in 1995, Manchester United played Crystal Palace away from home in a match that has since been immortalised for Eric Cantona’s incredible outburst.

Signed from Leeds United, Cantona was United’s talisman, their leader and their chief creative genius. The Frenchman’s arrival at Old Trafford kick started an era of unprecedented success for the Red Devils. Since arriving from Elland Road in 1992, Cantona had helped Alex Ferguson win two league titles and had been named the PFA Player of the Year in 1994. But Cantona had a reputation for having a short fuse. The match against Palace bore witness to his temperament in all its glory.

The first half ended scoreless but in the 48th minute, Cantona was sent off for kicking Palace defender Richard Shaw. He was then escorted towards the tunnel as a torrent of boos rang around the stadium. Then, out of nowhere, Cantona launched himself into the stands to kick a Palace fan in the chest. The supporter, a man called Richard Simmons, was verbally abusing Cantona as he went off the pitch. The Frenchman, unable to tolerate it anymore, decided to take matters into his own hands, or feet rather.

Despite being down to 10 men, United took the lead six minutes later but could not sustain that as Palace equalised in the 79th minute to end the match in a draw.

Cantona was suspended for the rest of the season, ordered to do community service and was slapped a hefty fine. Perhaps this was what stopped United winning yet another Premier league title as they finished just one point behind champions Blackburn Rovers.

Simmons was not spared for his role in the altercation. The Palace supporter was jailed for 24 hours and was banned from all football stadiums in England and Wales for a year.