PokerStars has established a reputation for adding the finest players in world sport to their Team PokerStars SPORT roster of sponsored pros.

And in Brazilian legends Ronaldo and Neymar, the online poker giants undoubtedly boast two of the greatest individual talents to have ever graced the football field.

However, while both players can count themselves among the true elite of world football, the pair are relative newcomers when it comes to playing poker. Here, we consider a dream scenario: were the two to meet across the felt, would it be the old master or the young apprentice that held the upper hand?

Naturally, in a game as fluid and dynamic as No Limit Hold’em, being able to adapt your strategy to suit certain situations is key.

Both Ronaldo and Neymar have been heralded as “complete” forwards, meaning they are versatile and capable of adjusting to the changing demands of any big game scenario. But it is perhaps the latter’s greater positional flexibility that gives him a slight edge.

While Ronaldo was capable of playing in several offensive positions, his best work was always done in his favoured striking role. Neymar, however, is equally potent as a striker, winger or attacking midfielder, and his ability to seamlessly change roles will certainly serve him well at the poker table.

When it comes to being successful at poker, extracting the maximum value from your winning hands is undoubtedly key to long-term profitability. Someone as lethal in front of goal as Ronaldo over the years has definitely demonstrated the ruthless streak that is needed to flourish at the felt.

True, the three-time FIFA World Player of The Year has benefitted from a longer shelf-life than the young prodigy thus far, but due to Neymar’s role as a left-sided forward he’ll have to do something remarkable to catch the master.

Keeping your composure when things aren’t going your way at the table is obviously vital if you want to survive the often cruel variance of playing poker, and in this respect, Ronaldo’s superior disciplinary record during his club football career leaves his younger counterpart well off the pace.

Though Ronaldo has made over 160 more appearances than Neymar to date, he was booked far less frequently. Indeed, with 69 cautions and four sendings off, Neymar is seen as something of a volatile player and his temperament does not compare well with Ronaldo’s 29 career yellows and two reds.

Having the self-belief to back your convictions at the poker table is essential when it comes to making great reads and running big bluffs, and with the arrogance of youth on his side, one would fully expect Neymar to hold all the aces when it comes to having confidence in any heads-up bout.

In truth, both Ronaldo and Neymar have displayed great humility off the pitch during their careers, but with Brazilian icon Pelé already proclaiming the latter to be a better player than Lionel Messi, some of the fame must have gone to Neymar’s head. The swagger the 24-year-old gains from playing in arguably the greatest Barcelona side in living memory will surely help him in this category.

Kaycee James, poker player and writer at PokerSites.com told us “whether you’re playing live or online, confidence is a huge factor when playing poker. If you play or look weak, you risk being railroaded by stronger players, make bad decisions and ultimately losing money. My money is on Neymar!”

While Ronaldo and Neymar are both rightfully famed for their outstanding technical abilities, with the former often using his greater height and power to shrug of defenders, the latter’s slighter stature has meant he has often been forced to rely on individual pieces of skill to create his chances.

With quick feet and an even quicker brain, these traits should certainly translate well onto the poker table, where being able to think several moves ahead has always been a key skill. Indeed, while Ronaldo was an excellent finisher, Neymar’s greater trickery and eye for an incisive pass means he could arguably grow to be a more complete player than the striker, and thus he holds the edge here.

In poker, there is honestly no substitute for experience. Feeling comfortable in a variety of situations because you have been there and done it before allows you to make more rational decisions in the heat of the moment – and this intuition can really improve your results when the going gets tough.

Though Neymar is likely to eclipse Ronaldo’s 426 club appearances and two winning World Cup campaigns one day, for the time being at least, the man dubbed “the phenomenon” stands head and shoulders above his countryman in this respect. His greater experience over the years should ensure he has the know-how to close out the match, ensuring a narrow victory for the legendary marksman. 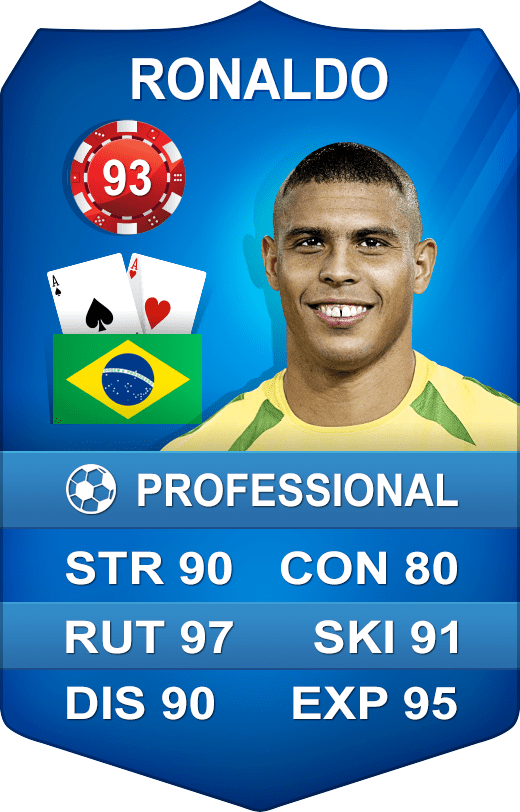