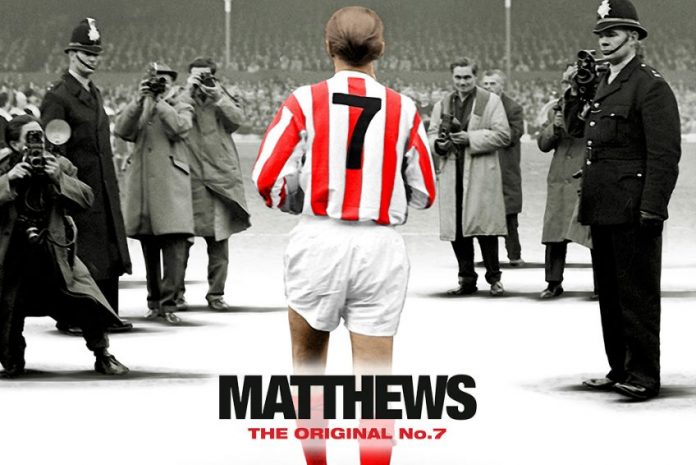 Widely considered to be one the greatest players of all-time, Sir Stanley Matthews’ achievements on a football pitch are firmly etched into the game’s folklore.

When you think of Matthews many memories come to mind – his ability on the ball that earned him the nickname ‘The Wizard’, his performance for Blackpool in the 1953 FA Cup Final against Bolton Wanderers and his superb efforts in an England shirt.

However, his contribution off the pitch was perhaps even more important, particularly in respect of his work to develop the game in South Africa back in the 1970s.

A stunning feature documentary simply entitled ‘Matthews’ brings together previously unseen archive footage, photographs and interviews to tell the incredible true story of one of football’s most legendary personalities.

It charts the story of how Matthews used his status to defy the apartheid government in South Africa to teach football in the all-black townships of Johannesburg, transforming the lives of the young players who became known as ‘Stan’s Men’.

His work undoubtedly inspired many African youngsters to take up the game and opened the door for many top stars from the continent to make their mark on the world stage.

Featuring contributions by Gary Lineker, Sir Michael Parkinson, Patrick Barclay, Jimmy Armfield and many more, ‘Matthews’ is a wonderfully produced, emotional tale, about a man who helped others simply because he could, not because he had to.

His decision to take some African boys to Brazil in 1975 was truly ground-breaking and this humanitarian act of kindness is central to the film’s storyline.

His impact on the youngsters was such that Matthews had a throne built for him, yet his humility shines like a beacon throughout the documentary.

Matthews’ interest in growing the game in Africa was sparked over 60 years ago when he travelled to Ghana to play a series of exhibition matches to celebrate the country’s independence.

His presence there would have been akin to the likes of Lionel Messi or Cristiano Ronaldo heading to a war zone to take part in a football game.

More than 80,000 spectators turned up to watch his first three matches against Kotoko, Sekondi Hasaacas and Kumasi Cornerstone, with Matthews mobbed by fans at each one.

Ghana’s first President, Kwame Nkrumah, was inspired by Matthews visit to use sport to bring the nation together, and it was this ethos that fed into the footballer’s visit to South Africa in the 1970s.

They watched matches at the Maracana Stadium, trained with the Brazilian national side which included players like Zico and provided hope to others that racial issues could eventually be overcome.

Lovingly pieced together by director, Ryan Scott Warren, with support from executive producers Stanley Matthews Jr and Joseph Pierce, ‘Matthews’ is a truly inspiring story about how one man put his neck on the line to make a difference to the lives of others.

The documentary is available on iTunes and Amazon.