In keeping with tradition, Uruguay will yet again go into a World Cup game unable to shake that seemingly perennial ‘underdogs’ tag that hangs like an albatross around their collective necks.

However the moniker seems a little more warranted than usual this time round, and for one good reason – that reason being the Netherlands’ resurgent second-half performance against Brazil in the quarter-finals.

After finding themselves a goal down at the break (having being resolutely outclassed by the Brazilians) it looked like the Dutch were fated to succumb to their overbearing latent potential once again – that was until a moment of second-half serendipity changed the course of the game completely.

Minutes after the restart, a whipped delivery from the cultured boot of Wesley Sneijder conspired to cause mayhem in the Brazilian penalty area and, under negligible pressure, ‘keeper Julio Cesar shanked his punch with the ball then flicking off the head of anchor man Felipe Melo and tamely coming to rest inside the far corner of the net.

The incident rattled the Selecao, but the Dutch were buoyed and the resurgent performance that followed Melo’s own-goal crucially turned the tide of the game in their favour.

It was Sneijder again who proved to be the architect of the South American’s downfall when he popped up amongst a static Brazilian back-line to nod a close-range header past Cesar, a goal that would eventually seal a World Cup semi-final berth for the Netherlands for the first time since 1998. 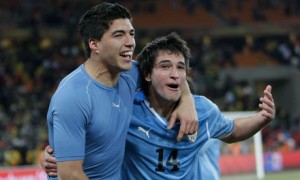 Uruguay’s progression through to the last four was no less dramatic, in fact it was arguably more so, having to overcome Africa’s sole remaining hopes Ghana in the lottery of a penalty shootout – but that is only half the story.

With literally seconds of normal time remaining and the scores tied at 1-1, striker Luis Suarez made the executive decision to block Dominic Adiyiah‘s goal-bound effort with his hands thus earning himself a red card and Ghana a last-ditch penalty, that would have undoubtedly seen them joining the Netherlands in the semi-finals.

With the weight of an entire continent on his shoulders, Asamoah Gyan chose power over placement and drove the spot-kick high over the bar.

Before the Black Stars’ talisman could even begin to comprehend his racing emotions, the final whistle was blown and extra-time was instigated.

Ghana pushed on valiantly but it was all to be in vain as, after no breakthrough was forthcoming during the added time, the tie went to penalties.

Two missed efforts from John Mensah and Adiyiah gave Sebastian Abreu the chance to send Uruguay into the final four at a World Cup for the first time in 40 years, and the Botafogo striker duly obliged – chipping an audacious effort past the wrong-footed Richard Kingson. 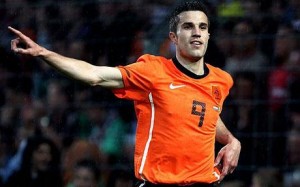 After being made to sweat for a few days, Netherland’s coach Bert Van Marwijk has been assured that striker Robin Van Persie will be fit to start. The Arsenal man was taken to hospital to have scans on an elbow injury he sustained against Brazil, but the results have shown that there is no fracture as was suspected.

Van Marwijk will also be able to recall defender Joris Mathijsen to his starting XI, as the Hamburg centre-back has been able to convincingly shake off the knee injury that kept him out of the quarter-finals.

The only players that the Dutch will have to do without are defensive midfielder Nigel De Jong and right-back Gregory Van der Wiel, who are both suspended.

Demy De Zueew is expected to stand in for De Jong with Mathijsen’s replacement against Brazil, Andre Ooijer, moving across to right-back to fill in for Van der Wiel.

Uruguay will definitely be without suspended pair Luis Suarez and Jorge Fucile (Suarez for his straight red against Ghana, Fucile for picking up two bookings over the course of the World Cup) and Nicolas Lodeiro, who has been ruled out of the rest of the tournament with a broken foot

Coach Oscar Tabarez also has a question mark over the head of captain Diego Lugano, who is struggling with a twisted knee sustained in the previous round – Andres Scotti being the Fenerbache defender’s natural replacement.

Lugano’s erstwhile defensive partner Diego Godin is also likely to miss the semi-finals, after limping out of the Uruguay’s second round game with South Korea with a thigh strain. 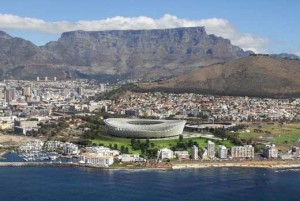 It took the Netherlands a little longer than expected to get going in South Africa but their second-half performance against Brazil was a clear indicator of what they are potentially capable of.

If the Oranje can reproduce the dynamism and resilience they displayed to come from behind to see off Dunga’s charges, then they should have a place in the World Cup final sewn up – however this current crop of Dutch players are hardly famed for their consistency.

Uruguay have an undeniably longer list of casualties going in to the game, but this will allow much fresher replacements to get a run out and, most crucially, they still have their giant-slayer Diego Forlan fully-fit and firing.

As with so many World Cup games so far, my head is telling me one thing and my heart is screaming another – therefore, I’m going to put my neck on the line and predict that it will be the South Americans who reach the finals, possibly via another penalty shootout.

You don’t need an expert to tell you this, the Dutch are favorites to eliminate the only South American survivor after they dominated the World Cup until the knockout stages began. 31/5 for an upset can win a fortune for you but it seems highly unlikely as Arjen Robben and Wesley Sneijder are in the form of their lives. Click here to bet on this and other World Cup games.

You can watch Netherlands take on Uruguay live online as well as all other World Cup matches, plus hundreds of football games from around the world. Read our live World Cup football page for more details.