Manchester United manager Jose Mourinho reportedly wants to add one more marquee player to the squad before the end of the transfer window. The Red Devils have already signed Eric Bailly this summer, but it seems Mourinho wants another top quality defender for the centre back role.

The Red Devils have smashed the world transfer record to sign Paul Pogba from Juventus earlier this month, but it seems United have not completed their business yet.

Mourinho wants to bolster the defence ahead of the 2016-17 season and despite signing Eric Bailly he wants another top quality defender for the centre back role. 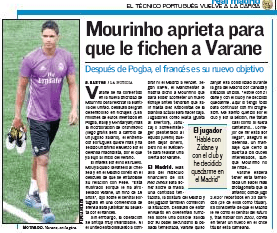 According to reports from AS, Mourinho has tried his luck, again, to sign Raphael Varane from Real Madrid, however, the Frenchman is currently not looking for a move away from Spain.

Back in July, Marca reported that Mourinho had made a contact to sign Varane and United were even ready to launch a €40m bid for his signature.

Varane, who was signed by Mourinho in 2011 while he was the manager of Madrid, made 23 starts in La Liga last season and served as the club’s third choice option behind Sergio Ramos and Pepe.

Mourinho tried to lure the Frenchman with the offer of a regular first team football. Varane, 23, seriously considered the offer but later decided to continue with Madrid after having a personal conversation with Zinedine Zidane.

Madrid convinced him that he will be given more opportunities in the coming season and that he still has the age on his side to impose himself as a key player for Los Blancos.

Furthermore, United board has informed Mourinho that he needs to sell a few players before making another marquee singing. The likes of Marcos Rojo, Bastian Schweinsteiger and Juan Mata are probably not in Mourinho’s first-team plans, and the club may sell them to recoup money for one more marquee signing.