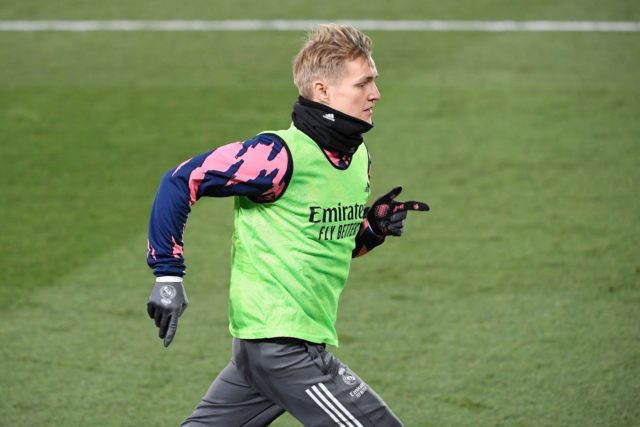 Arsenal boss Mikel Arteta has refused to comment on Martin Odegaard amid reports that the Gunners are interested in signing him this month.

However, Arteta has revealed that the north London club are working to bring a few players this month.

Bolstering the attacking midfield region is a priority for the Gunners boss, with Mesut Ozil departing and Willian proving to be a massive flop.

We covered yesterday that Arsenal have made a proposal to Real Madrid to sign the 22-year-old attacking midfielder, but there could be stiff competition with an unnamed Premier League club also sniffing around.

When Arteta was asked to comment on the veracity of the Odegaard transfer link, the Spaniard diplomatically distanced himself from the ongoing speculation.

He said: “I cannot comment about players that play for different clubs.”

However, Arteta has admitted that Arsenal are looking at players in different positions, as they are short in numbers in certain areas.

🗣 "I cannot comment about players that play for different clubs"

SL View: Would be a good signing for Arsenal

Six years ago, at the age of 16, when Madrid signed Odegaard, many felt that he could become the next big superstar in world football, especially with the hype surrounding him.

Fast forward and he has struggled at Madrid badly, failing to cement his place in the senior team, and Los Blancos are expected to grant him his wish to move out on loan this month for regular first-team football.

However, that’s only one half of the story. There’s another side to Odegaard’s career that should excite the Arsenal fans.

He was outstanding while on loan at Real Sociedad last season, registering seven goals and nine assists across 36 appearances. He had a standout season at Vitesse Arnhem in 2018/19, creating more chances than any other player in the Dutch league.

Odegaard will be a good signing for Arsenal, although he is not a guaranteed starter with Emile Smith Rowe emerging as a reliable option in the attacking midfield role.