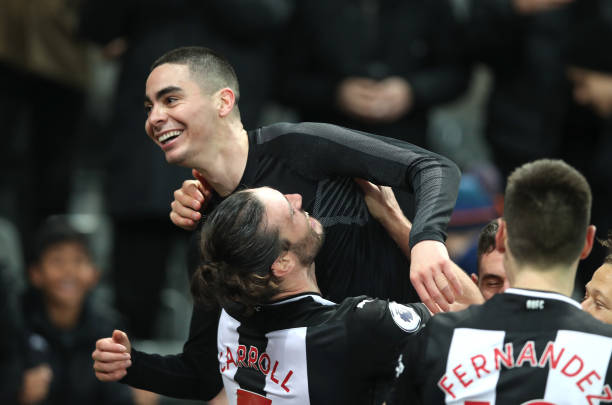 Newcastle United left it late to pip Crystal Palace to all three points at Saint James’ Park on Saturday, securing another valuable victory that steers them further away from the relegation picture.

Miguel Almiron scored the only goal of the game to finally open his Newcastle account, and the Paraguay international couldn’t contain his joy, pulling off his shirt in celebration and not minding the subsequent booking.

Here is the picture that perfectly sums up how he felt:

Look at his face. Brilliant photo from @MartinSwinney73. #nufc pic.twitter.com/MzYA2lQCdG

We're all so thrilled for you, Miggy! 👏🤩#NUFC pic.twitter.com/y4gKdE7RRV

Since his arrival from Atlanta United for a then-club record £20 million in January, the 25-year-old had gone 26 Premier League games without a goal, and it must have been very relieving for him to finally grab his first.

Almiron scored 13 goals and 11 assists in 37 league games for the Major League Soccer side in 2018, and he definitely knows how to finish.

While he has taken time to find the back of the net in the English top-flight, the Paraguayan winger will now be fired up going forward, and finally breaking the duck could open the flood gates.