Liverpool were heavily linked with a move for Inter Milan’s highly rated young midfielder Mateo Kovacic this summer, and until last month, his transfer rumours used to feature almost on a daily basis on all major Italian newspapers. For instance, check the serial coverage on the story, we did from the Italian newspapers last month.

The above reports only suggest there was something in those rumours, but probably there wasn’t any concrete effort from Liverpool.

Kovacic has given a long interview to Gazzetta dello Sport where he was asked to comment on his future, and whether he is aware of Liverpool’s €30m offer for him. 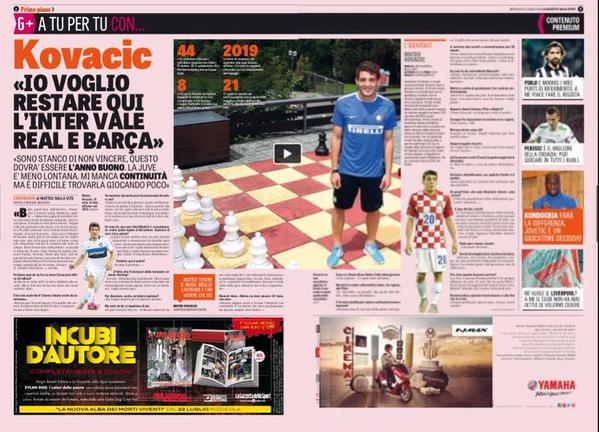 “Liverpool offer? You have to ask the club about that, I’ve never been told they want to sell me,” he said.

The 21-year-old Croatian midfielder is seen as one of the brightest talents in world football, and Italian media thinks he is on the same level of great players like Andrea Pirlo already.

Kovacic was kind enough to answer whether he could be a possible replacement for Sterling, who has joined Manchester City: “We’re different players and perform different roles.”

Liverpool have been busy in the transfer window, having signed six players already, but there could be more additions in the squad. Central midfield is one area where Brendan Rodgers might be looking to bolster, but it seems, Kovacic is not an option for Liverpool anymore.