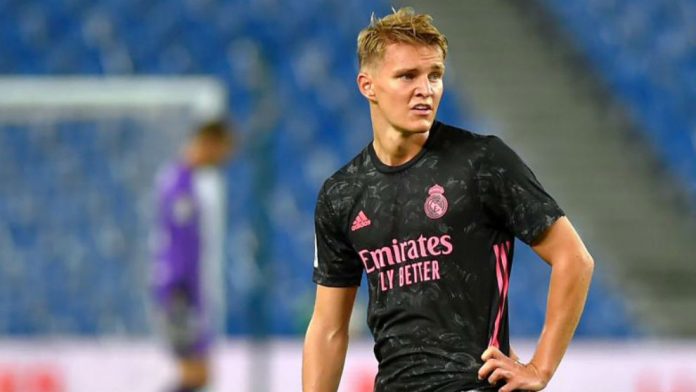 Martin Odegaard’s troubles for Real Madrid continue, with the midfielder having suffered an injury to his right soleus muscle over the international break, according to the club. The midfielder has only managed an incredible four appearances in five years for the Spanish giants. The statistics do not do any favours for Odegaard.

Nevertheless, following a stop-start career with the Los Blancos, Odegaard has made a name for himself with two loan spells at Vitesse and Real Sociedad respectively. An impressive return of 18 goals during this period propelled Odegaard into Zidane’s thinking, with the manager refusing to sanction another loan.

Despite being on the fringes of the Real Madrid team, Odegaard continued to impress on the international stage. A star-studded performance followed against Romania in the Nations League. The Norwegian orchestrated the midfield and finished the match with two assists. With Real Madrid having suffered a shock 1-0 home defeat at the hands of Cádiz, the calls for a creative midfielder have become more vocal. After all, Madrid only managed to muster a solitary two shots on target against a newly promoted side.

Role In The Real Madrid Midfield

With the duo of Toni Kroos and Luka Modric not getting any younger, Zidane may be questioning how long the two Galacticos can cut it at the top level. The latter hardly covered himself in glory, with Modric being hooked off at half-time against Cadiz. An off-game can happen to the best of players, but with Modric reaching the age of 34, how long can the Croat continue?

Injury Disruption And The Future

Despite the injury, the initial diagnosis has Odegaard missing for up to one month. This will potentially rule the midfielder out of the next six games, including the Champions League opener against FC Shakhtar Donetsk. Although the injury may have come at a bad time, Odegaard is made of stern stuff. Few would have backed themselves to move to a European giant at any stage of their career, let alone at the tender age of 16. Having refused to fall by the wayside, the future looks bright for Odegaard.