Manchester United are expected to get back to winning ways on Wednesday night when they host struggling Burnley.

Louis van Gaal’s side rescued a point at West Ham on Sunday but it is now only two wins from their last six in the Premier League.

Burnley’s point at home to West Brom was enough to keep them out of the relegation zone heading into the midweek fixtures. The Clarets did blow a 2-0 lead in that home game though.

Luke Shaw was sent off in stoppage time and will therefore miss this game through suspension.

Michael Carrick is expected to miss all of February through injury – he is the only other absence.

Stephen Ward’s ankle injury has kept him out for over two months now. He remains on the sidelines.

Dean Marney is a doubt with a knee injury that allowed him to play only 45 minutes versus West Brom on Sunday. An achilles injury has kept Matthew Taylor out since the end of August. 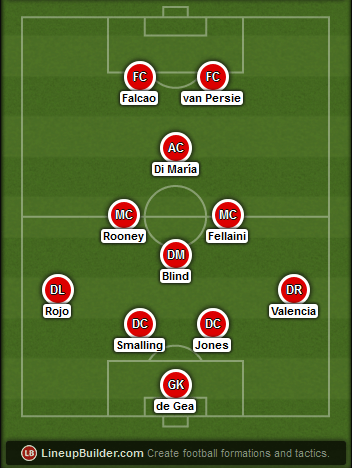 Marcos Rojo can cover the suspended Luke Shaw at left-back allowing Chris Smalling to come back into the team and partner Phil Jones once again. Adnan Januzaj had a quiet game on Sunday so we can see him being replaced by Marouane Fellaini. The partnership of Radamel Falcao and Robin van Persie hasn’t worked very well – we think van Gaal will give it another chance against a weak defence to see if they can work together. Alternatively, Juan Mata could come into the number 10 role and hand Ángel Di María a more attacking role. 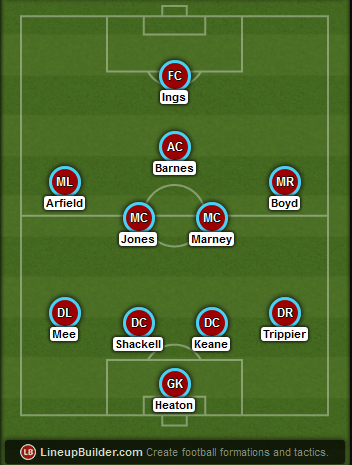 Sean Dyche likes to play the 4-4-1-1 formation. Danny Ings has been fit for a few weeks now. Former Manchester United youngster Michael Keane has been partnering Jason Shackell since late November. The two wide man have been pretty useful this season – George Boyd is full of energy down that right wing.

Robin van Persie vs Jason Shackell
West Ham kept Manchester United’s Dutch ace relatively quiet on Sunday but Burnley will do well to do the same at Old Trafford. Six of Robin van Persie’s nine Premier League goals this season have come at home and with the playmakers he has around him you’d expect him to get a few shots on goal in this match. Did miss a good one-on-one chances versus West Ham but Burnley won’t be wanting to give him another one of those.

Wayne Rooney vs David Jones
Another product of the Manchester United youth system in the Burnley side is David Jones. He could be tasked with the difficult job of keeping Wayne Rooney quiet. The United star has yet to have a single shot on target in 2015, but you wouldn’t put it past him to find the back of the net in this one. The home side expected to dominate possession and territory should lead to Rooney getting a few shots away on goal.

Ángel Di María vs Kieran Trippier
Manchester United’s record summer bye has had a quiet start to 2015. In fact, he hasn’t produced a great deal since September in truth, albeit he has been sidelined for a while since then. Still, the Argentine has certainly been misfiring with his shots and crosses since the turn of the year. This matchup should give Ángel Di María a good opportunity to find his form. A number of wingers have had success dribbling past Burnley’s right-back this season, and with his pace and close control, it shouldn’t be a problem for the Argentine to do just the same. Will Di María produce a final product this time is the question.

Prediction: Manchester United 3-0 Burnley
Only Leicester City and Queens Park Rangers have allowed Manchester United to score more than one goal in their last six Premier League matches. Those are the bottom two and Burnley are just above them. The Red Devils will be keen to put on a performance after the weekend’s draw and this is a great opportunity for them to do just that. They don’t play again until Monday against League One opposition in the FA Cup, so expect van Gaal to name his strongest XI and go out for a dominant win.