While Chelsea are planning to buy at least three players from the squad that broke La Liga monopoly and reached Champions League finals, Manchester United are targeting to lure midfield dynamite Koke. 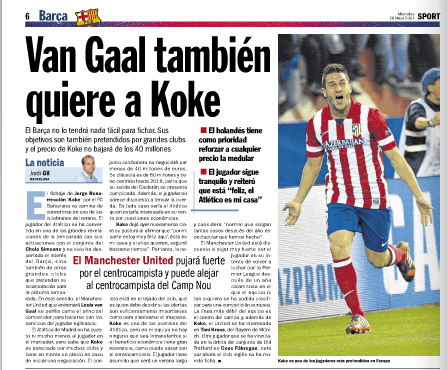 The 22-year-old midfielder has had a phenomenal campaign for Atleti last season. United tried to lure him in the January transfer window where they were told the player was not for sale. And it is this recurrent interest of top European clubs, coupled with the player’s outstanding form, Koke’s release clause has increased to €60m.

Spanish newspaper El Confidencial however felt from the beginning that this bump in release clause is actually an eye-wash – basically it’s a ploy of selling their top players at a higher price a la Fernando Torres, Sergio Aguero and Radamel Falcao.

The same newspaper now reports that Manchester United are willing to enforce the clause of the midfielder, as Louis van Gaal wants to cure the primary disease aka midfield problem that has plagued the club for some time now.

Catalan newspaper Sport are also walking on the same line adding that United will back the manager with funds, should the club approach formally for Koke.

However, Koke has time and again insisted that he is happy at Atletico (though a cliche dialogue) and not thinking about a move.

“I have a long contract and I am not thinking about leaving,” he told Minuto 116 back in March.

“Atletico is my home. I am happy that [manager, Diego] Simeone has confidence in me and I want to keep working for him for many years.”

So, as it stands, Manchester United need to pay €60m odd to secure one of the darling boys of Spain. It remains to be seen whether the interest is genuine or are the press going with the motion as so many Atletico players are getting linked with Premier League clubs.