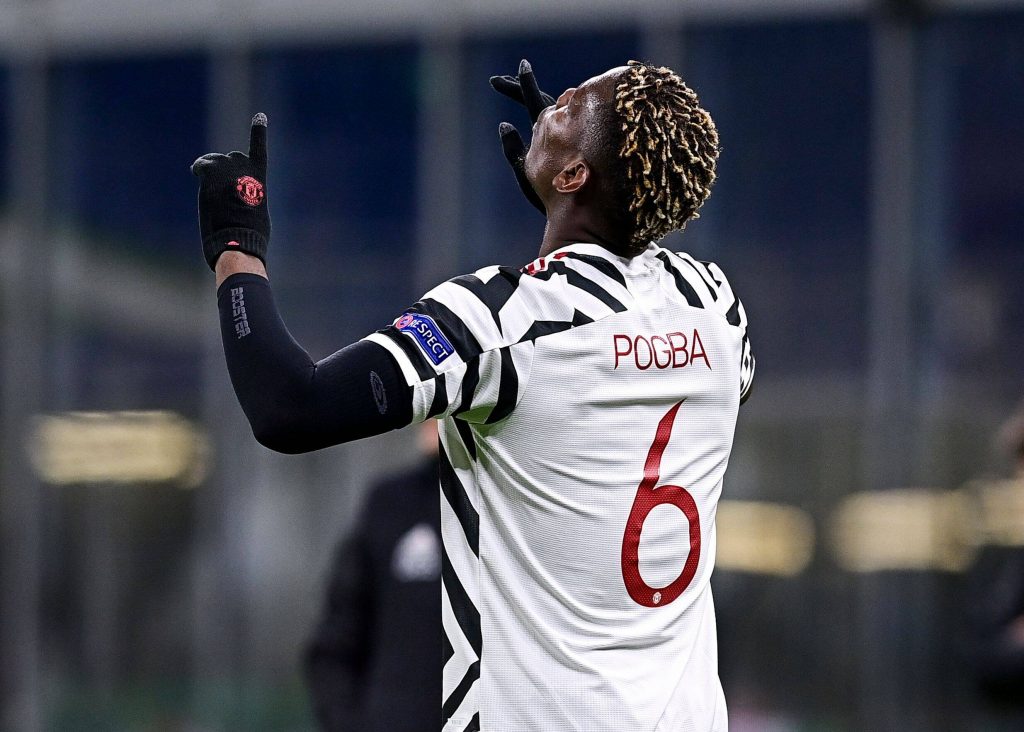 Manchester United claimed a place in the Europa League quarter-finals courtesy of a 1-0 victory away at the San Siro over AC Milan on Thursday.

Substitute Paul Pogba scored the game’s only goal, which proved enough to triumph over the Italians 2-1 on aggregate.

Coming into the second leg, the tie was finely balanced following last Thursday’s 1-1 draw in the first leg when Simon Kjær scored a stoppage-time equaliser for Milan.

Since then, both sides had returned to league action, and Ole Gunnar Solskjaer opted to keep the same starting 11 from Sunday’s 1-0 Premier League win against West Ham United at home. The Red Devils lined up as follows:

Meanwhile, AC Milan manager Stefano Pioli had seen his side lose 1-0 to Napoli last time out and chose to make four changes to his team ahead of the second leg of the round of 16 tie.

In came Pierre Kalulu, Soualiho Meïté and Alexis Saelemaekers, along with last week’s goalscorer Simon Kjær at the back.

Meanwhile, United loanee Diogo Dalot and former player Zlatan Ibrahimović were on the bench for Pioli’s side, with the latter making his return from injury.

Having conceded in the first leg, United came into the second game having to score at least once to have a chance of qualification, and it was Solskjaer’s side that fired the first shot at goal.

Following a cagey opening 10 minutes, Luke Shaw weaved his way into the Milan box and laid the ball off to Bruno Fernandes on the edge, who struck it goalwards but saw his shot go just over the bar, a signal of intent from the evening’s visitors.

Dean Henderson was then called into action for the first time in the game as he had to get down low to take a driven shot at goal from Franck Kessié, but he dealt with it well and had the ball comfortably in his grasp.

Shortly afterwards, it looked like United might have been awarded a penalty as Daniel James went down in the box under the challenge of Chelsea loanee defender Fikayo Tomori.

James raced into the area, but Tomori did well to keep up with the Welshman and just got his studs to the ball before felling his opponent though a VAR check did take place.

From then onwards, a period of scrappiness in the middle of the pitch ensued as Scott McTominay and Fred tried to get the better of their Italian counterparts. Neither team really came out on top, and whenever called upon, defenders cleaned up nicely at either end.

Before the half-time break, however, the home side had two chances to take the lead in quick succession, with neither of them being taken.

Saelemaekers unleashed a shot from the edge of the box, which was tipped away from goal by Henderson, but the golden opportunity fell to Rade Krunić on the stroke of the half-time whistle.

A livewire in the first leg at Old Trafford, Krunić met a low cross from the right and volleyed the ball under challenge from the United defence.

If the Bosnian had directed his shot on target, Henderson had no chance of keeping it out, but the ball went narrowly wide of the goal, and the referee blew the whistle straight afterwards to signal the end of the first 45 minutes.

The same scoreline at half-time as it was in the first leg last week – 0-0 – meant that the Red Devils were on their way out of the Europa League on away goals if the scoreline stayed the same way.

They needed a goal, and manager Solskjaer managed to make lightning strike twice in terms of an inspired half-time substitution. Last week, it was Amad Diallo, and this week he turned to Paul Pogba.

Returning from injury and making his first appearance since limping off against Everton on February 6, Pogba entered the field in place of Marcus Rashford, and it didn’t take him long to make an impact.

Donning the infamous United third shirt – patterned like a Zebra – the Frenchman had his team in the lead within three minutes of the match restarting.

With some neat footwork in the box, the Red Devils had Milan’s defence scrambling to block shots from James and Fred before the ball fell to Pogba at close range though he still had work to do.

Pogba dummied a shot on goal which ‘keeper Gianluigi Donnarumma fell for, before calmly lifting the ball into the roof of the net and over the flailing Donnarumma who could do nothing about it.  This was Pogba’s fifth goal of the season, and all five have come away from home.

With Solskjaer’s side now holding the lead both in the second leg and on aggregate, Milan had to come out and try to score, meaning that the game opened up. Neither side were able to take advantage of this though not through a lack of trying.

In the five minutes after the goal, Saelemaekers and Mason Greenwood both saw shots saved at either end before United decided to close the game once more, becoming defensively resolute.

So much so that on the 65th-minute mark, Pioli opted to bring on former Red Devil Ibrahimović from the bench. Recently recalled to the Swedish national team, the 39-year-old made his first appearance since February 28 following a thigh injury.

United loanee Dalot also made an appearance off the bench in place of Kalulu.

Then came a warning for Solskjaer’s side that the tie wasn’t over as Victor Lindelöf blocked Kessié’s shot at the near post with a sliding challenge. If he hadn’t, his side could have been in big trouble.

United managed to break away on the counter on numerous occasions but to no avail as they didn’t trouble Donnarumma and almost paid for it when Ibrahimović directed a signature powerful header at goal from close range.

It was seemingly in, but Henderson managed to claw the ball away from danger, a real marker for him in terms of staking a claim to keep his place in the team now that De Gea has returned into contention.

The save didn’t seem to get the coverage it deserved, as it turned out to be match-winning alongside Pogba’s goal.

In the final quarter of an hour, Milan pressed but didn’t really trouble Henderson, and it was United who had the better chance to claim a second goal of the evening to really kill the tie off.

Two minutes before the 90 were over, Pogba met James’ cross from the right and looped a header goalwards, unlucky to see it drop just over the bar.

Solskjaer’s side heard the full-time whistle after five minutes of second-half stoppage time and celebrated in the knowledge that they had qualified for the quarter-finals of a tournament they are now favoured to win.

A 1-0 victory in Italy was enough to claim a 2-1 win in the tie on aggregate, and all eyes will now be on tomorrow’s draw for the last eight of the Europa League.

United can draw any team left in the tournament. The line-up is as follows: