Manchester United are favourites to sign Atletico Madrid star Koke in the summer transfer window and are set to beat Barcelona in signing the midfielder, according to the Spanish newspaper Mundo Deportivo. 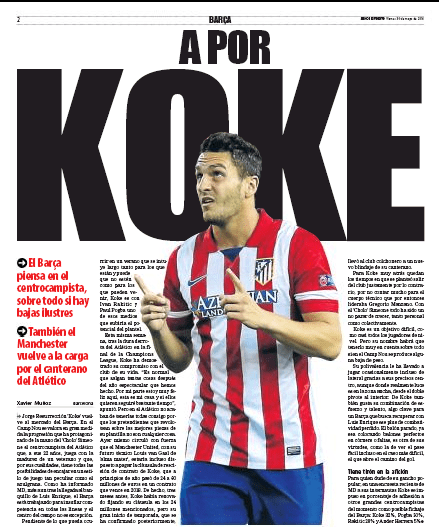 The 22-year-old has been in impressive form for the Spanish capital club during the 2013-14 season where he scored six goals and managed 13 assists from 36 La Liga matches. His form has attracted interest from Spain and England.

Atletico made sure the player signed a new deal earlier this year, which saw him extend his stay at the Vicente Calderón Stadium till 2018. This has seen his release increase from €24m to €60m.

United appointed Louis van Gaal as their manager for the next season. Mundo Deportivo claims the Red Devils are front runners as the Holland boss is set to trigger Koke’s to €60m release clause.

Barcelona are keen on snapping up Koke’s signature as their president Josep Maria Bartomeu admitted the Spain international is a great player.

“Koke is a spectacular player and I’m sure any club would want, but we should see if Atletico will want to sell their star player. We cannot say names, we would, but we cannot,” added the Barça president,” Bartomeu explained.

Despite, the Catalan club president’s latest comments, United are still confident to beat Barcelona for Koke’s signature and bring him to Old Trafford in the coming transfer window.

United will hand Van Gaal close to £150m of transfer budget to bring in players to the club this summer. Should the Red Devils land Koke, they will be left around £100m, having spent a major portion of their kitty on Spanish midfielder.