Manchester United’s Jesse Lingard & Victor Lindelof and Manchester City duo Kyle Walker & Raheem Sterling should feature as England and Sweden meet in the World Cup quarter-finals at 3pm. The two nations lock horns at the Samara Arena, with England the favourites to reach the semi-finals.

Gareth Southgate’s men finished second in Group G with six points from three games, beating Tunisia 2-1 and Panama 6-1, before losing 1-0 to Belgium. In the last-16, England beat Colombia on penalties after drawing 1-1 at the Spartak Stadium. Striker Harry Kane has been largely to thank for their success, with the Tottenham Hotspur forward scoring six goals in three outings. He will be key against Sweden.

As for the opposition, Janne Andersson’s side finished top of Group F with six points from three games, beating South Korea 1-0, losing 2-1 to Germany and beating Mexico 3-0. Sweden then beat Switzerland 1-0 in the last-16 to make it this far. They’ve shared the goals around this tournament with four different scorers and boast a rigid defence – keeping three clean sheets in four games.

England are undoubtedly the stronger side and deservedly favourites, but Sweden didn’t make it this far on good fortune. They’ve earned their place and will be a forced to be reckoned with at the Samara Arena.

New customers who open a new Coral account with a bet on Kane to score in Saturday’s World Cup showdown with Sweden can snap up exclusive 40/1 odds. Download the app (iOS or Android) ahead of the game and get ready to cheer on Kane and the boys as they chase World Cup glory! 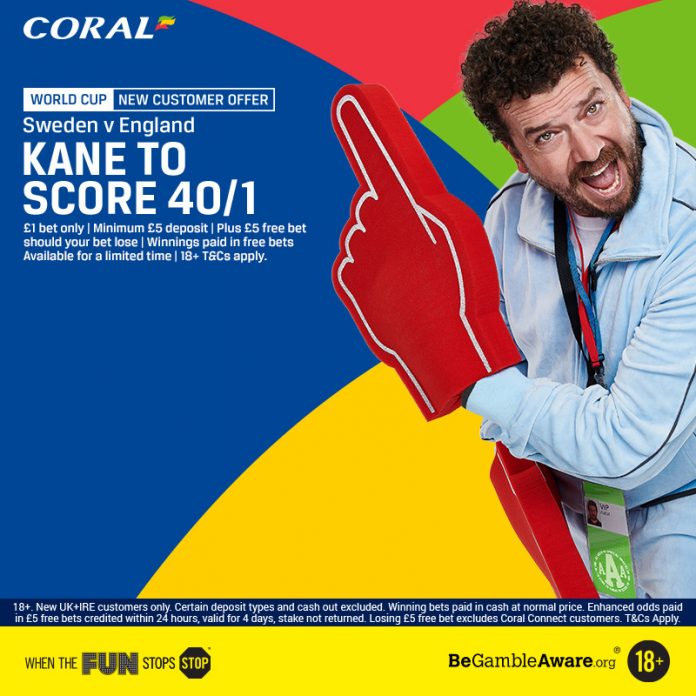 Let Harry Kane score you a 40/1 winner this Saturday.

Simply sign-up (iOS, Android) and have a patriotic punt on the England captain to strike in the quarter final v Sweden (3pm kick off). If Kane scores – at any time – you collect!

One more against the Swedes on Saturday should seal it – and also guarantee you a 40/1 winner!

And if Harry fails to hit the net, Coral will compensate you with a £5 free bet. It’s the smart bet.