Another typically ‘ok, but not great’ performance by the Champions saw us defeat a gutsy Burnley side 3-0, with Berbs, Rooney and new boy Diouf finding the net on a routinely humble afternoon at OT.

As usual, we made it difficult for ourselves, especially as the away side threatened surprisingly well and had a few decent efforts that could have, and probably should have, punished us for our lack of concentration.

The three chances of note – Fletcher’s in the first half and Nugent’s and Eagles’ in the second – all had one common, worrying trait: our defence was all too easily split wide open. Had the chances fallen to more able, perhaps more confident attackers, you would seriously have to worry as to the final outcome.

Fletcher and Nugent, both on the back of counter-attacking moves, fluffed their efforts wide, and Eagles, when we had already taken the lead, took the ball away from our defence with some nifty yet fairly conventional footwork that created himself space for the shot that fell straight into the arms of the ‘keeper…didn’t he used to play for a big club? 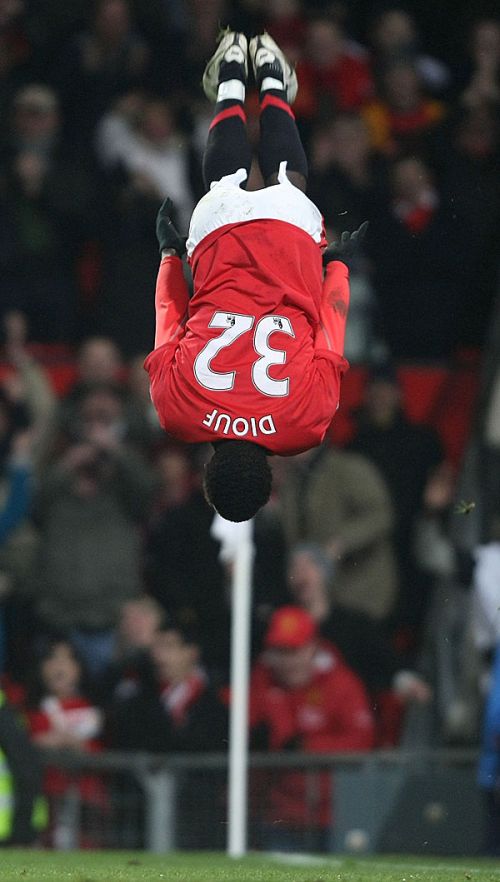 To be honest though, we did our job well on an afternoon when Chelsea did there’s even better – annihilating Sunderland 7-2; the same team we needed to rely on a late equaliser to make it 2-2 a few months ago. But only the most ignorant, unknowing of football fans would dare utter suggestions aimed towards Chelsea running away with it.

It was only a couple of months ago, after a thoroughly formidable display at the Emirates saw them destroy Arsenal 3-0, that the same noises were being made; only for them to immediately go on a poor run that saw us close the gap to 2 and greatly reduce their superior goal-difference.

Back to our game; it was of course hardly a display to shout about and it was certainly a game we were expected to win, but what I’m slowly starting to accept, for probably the first time this season, is that as long as we are winning, then surely there can be little room for complaint?

Our games until the end of February, with the exception of a trip to Arsenal on the last day of January, are seemingly perfect fixtures for us to maintain the pressure at the top, score more goals and capitalise on any potential slip-up by Chelsea; who have never-easy away ties at Hull, Burnley as well as playing host to Arsenal.

As bitter and pessimistic as I am about our clubs worsening state after a summer that saw us lose our best player and ineffectively replace him, I have to understand that the days of glittering football are, for now, absent and perhaps no longer relevant as we rely on and generally accept this new, more direct, less ambitious and more understated style of football. And as long as we win by playing it, what more can we ask for?

Good.
3 goals; 3 different goalscorers. I don’t know about anyone else, but one thing I really like about this season is the vast array of goalscorers we boast. Now with Diouf added into the mix, that brings us on to 16 different scorers for the season. No one else in the League can boast such an eclectic array of finishers.

Diouf. As with the game at St. Andrewslast week, he was given little time and opportunity to impress, but he still managed to do so; taking his goal and our third of the afternoon superbly.

Clean-sheet. Only our 9th (out of 22) of the season. Let’s hope, as our defensive issues start to mellow themselves over time – with Ferdinand back in training as well as Van der saar starting for the first time since the Everton game in November – we will continue to improve and strengthen at the back.

Liverpool. Another 2 points dropped. Its fair to say that, for anyone that read my blog during the Stoke/Liverpool game yesterday, I was far from optimistic that the Scouser’s poor run would continue, as somehow they usually manage to worm their way out of these situations to conveniently eradicate all of Bentiez’s wrongdoings with one half decent result; but as a mate of mine so perfectly put it, they are quite simply the gift that keeps on giving.

Defence. As I mentioned, those three opportunities for Burnleythat were thankfully not taken could have resulted in far more detrimental consequences. The sloppiness of our defence had a part to play in all of those moves, and not wanting to point the finger, but Neville was particularly slow throughout the game; especially for Nugent’s chance.

Hardly known as the most nippy of strikers, the Burnley man skinned Gazza effortlessly with a single touch that took him out of the move. With Sheasy – the majority of last seasons first choice right-back – injured, and Brown – the 2007/08’s first choice right-back – reverting to centre-back, surely the only logical, able choice is Rafael. Sentiment should never take precedence over genuine ability; but unfortunately that’s looking more and more like the case as far as Fergie’s selection is concerned.