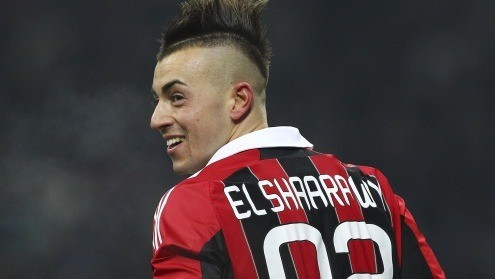 Manchester City will reignite their interest in AC Milan’s highly talented youngster Stephan El Shaarawy, when the transfer window re-opens in January, as per reports in Italy.

The former Premier League Champions were linked with a move for the Milan forward this summer heavily, but the youngster ultimately chose to stay at San Siro and further his career with the Serie A giants.

However, with the arrivals of Alessandro Matri and Kaka at Milan, his position has come under threat again. Coach Massimiliano Allegri has insisted that in order to incorporate so many attacking players he would deploy a 4-3-1-2 formation. Kaka, who returned to his old club, is expected to take the centre stage, while it may take some time for SES (commonly called) to adapt to narrower positions.

The 20-year-old was one of the star players for Milan last season, as he bagged 16 goals in the league, where most of his goals came early before the arrival of Mario Balotelli in January, when he was mainly the focal point of Milan’s attack. The Italy international primarily plays as a left winger but can also play as an attacking midfielder, and it will be interesting to see, how Allegri uses him in the coming months.

According to Italian media outlet Tuttosport, Manchester City and Borussia Dortmund showed interest in him, and could return again for him in January. It is suggested that City are planning to submit an offer of over €30 million during the winter window.

Undoubtedly a world class talent in his own right, SES will add an extra bite to an already star studded City squad. Whether City can land him, remains to be seen now.