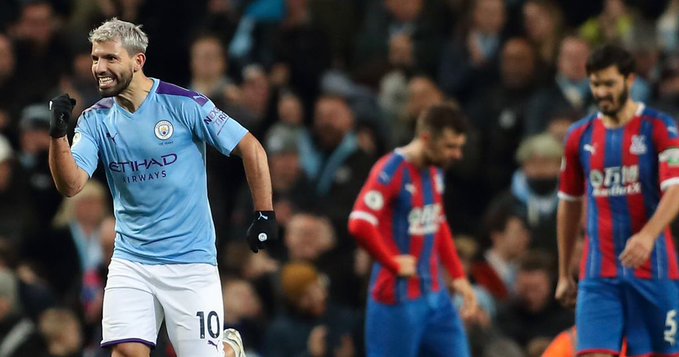 Manchester City’s title hopes were dealt another blow after they were held to a 2-2 draw against Crystal Palace in the Premier League at the Etihad Stadium on Saturday.

Kevin de Bruyne fired a first-half free-kick against the underside of the bar but apart from that City didn’t create enough clear-cut chances.

Palace took the lead in the first half through Cenk Tosun who joined from Everton on loan in the January transfer window. Gary Cahill out jumped John Stones at the back post, and Tosun was unmarked to steer home.

Palace lead over Man City through none other than Cenk Tosun! 🦅 pic.twitter.com/i2SbbInuaB

City came back strongly in the second half with Sergio Aguero scoring two goals within the space of 10 minutes. The Argentine scored his 250th and 251st goals in all competitions for City with those two strikes.

For the first one, he turned home a Gabriel Jesus cross. Benjamin Mendy produced a fantastic floating cross from the left which was expertly nodded home by Aguero for his second goal.

However, Palace had the final word. Wilfried Zaha ran down the left and put in a low cross that Fernandinho diverted the ball into his own net.

The result leaves Manchester City 13 points behind Premier League leaders Liverpool, who have two games in hand and play Manchester United on Sunday at Anfield.

Crystal Palace find themselves in 9th place with 30 points from 23 games. Palace winger Zaha took to Twitter after the game to express his reaction. He tweeted:

Giving up is not an option!! Proud of every single one of the lads today 🙏🏿 #Godisgreat pic.twitter.com/vDMC9971Ru