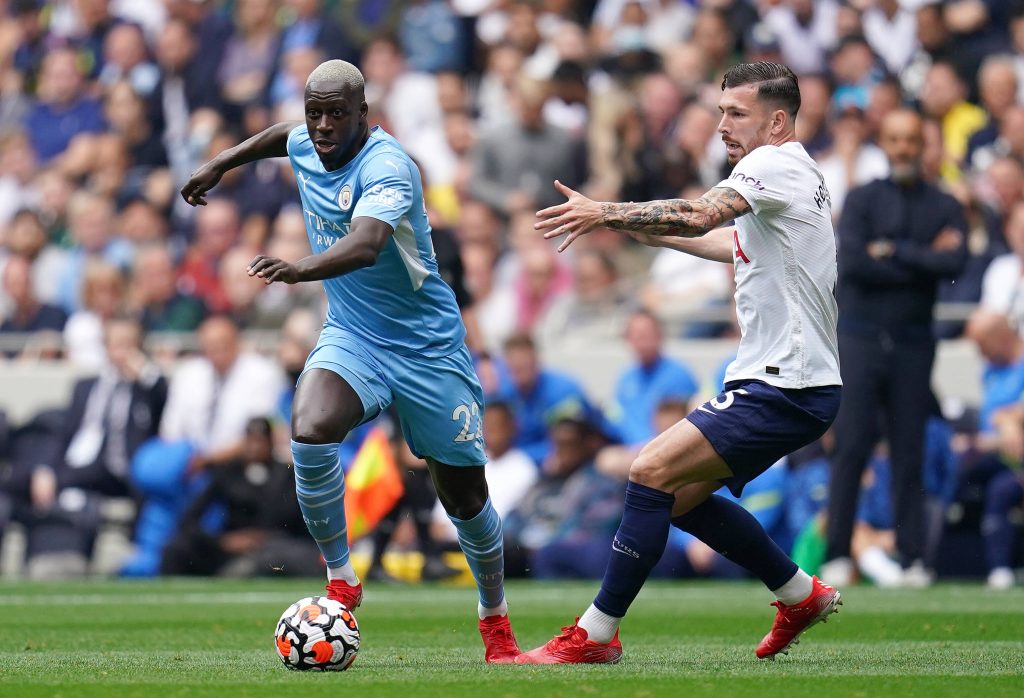 A selection of Manchester City fans on Twitter were left frustrated with Benjamin Mendy’s display against Tottenham Hotspur in their Premier League opener.

The Frenchman was picked to start at left-back ahead of Oleksandr Zinchenko and Aymeric Laporte, and he had a disappointing showing in his 79 minutes on the field.

Mendy was caught horribly out of position in the lead up to Son Heung-min’s goal in the 55th minute that created the space for the striker to curl his spot into the back of the net.

The 27-year-old was also guilty of misplacing several passes in his own half and it was clear that he was targeted by Spurs. He was dispossessed on 16 occasions.

Nathan Ake also had a difficult game at the Tottenham Hotspur stadium, but Mendy received the vast share of criticism from some of the fans on Twitter.

When are people going to realise that Benjamin Mendy is not good enough?

Son scoring from Mendy's side, what a surprise pic.twitter.com/9xuQNvlhEk

Well @ManCity that was a bit painful, that second half was like pulling teeth. Today has unfortunately underlined Mendy is done and we desperately need that centre forward. Still we started slowly last year and still romped the league so fingers crossed…. #mcfc

Everytime Mendy plays I realise how good Zinchenko is

Mendy’s career with the Cityzens has not kicked off in recent years. He has looked defensively vulnerable with his tendency to lose possession higher up the field.

Zinchenko had a superb European Championships with Ukraine. Some fans were clearly surprised with Guardiola’s decision to start with the £90,000-a-week star.

Meanwhile, there are clear signs that City may need to recruit a new striker after drawing blank in back-to-back games to start the season.

Harry Kane has been heavily touted to join the club this summer. Speaking after the game, Gary Neville believes that he could be set to join them.

💬 "Harry Kane – he comes back late, he's in isolation, he's not here today.

💬 "If you put all that together – he's the most professional player that you'll ever see, so something is going on."@GNev2 and the Super Sunday panel discuss Harry Kane's future…. pic.twitter.com/K0pDZFfbFT

The 28-year-old was the only player from England’s European Championship squad not to be involved in the first matchday. He did not appear to be at the stadium despite training.

With two weeks left, City are weighing up a British-record bid of around £127 million plus add-ons. Spurs have a big decision to make over the striker’s future.

Spurs are in a strong position to keep him with three years left on his contract. It will be interesting to see how they react to City’s improved offer for Kane.