Liverpool will be looking to continue their fantastic form when they welcome Burnley to Anfield this evening.

The Reds’ victory over Manchester City at the weekend moved them into within two points of the UEFA Champions League places and three points are expected from game #28.

Burnley are winless in their last six Premier League matches, losing four of them and start the evening in the relegation zone.

Mamadou Sakho remains a doubt with a knock that has kept the French international out of Liverpool’s last two matches. Dejan Lovren has filled in at centre-back in his place.

Steven Gerrard is back in training but is unlikely to feature this evening, whilst Jordon Ibe is set for a little spell on the sidelines with a knee injury. Lucas is still out with a groin injury.

Dean Marney is Burnley’s only first-team absentee through injury in this match. Matthew Taylor is also out but hasn’t featured much this season. 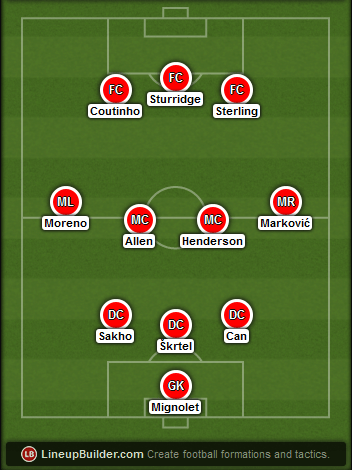 Should Mamadou Sakho be fit to return he’ll slot back into his left centre-back role as part of Brendan Rodgers’ preferred back three. Joe Allen and Jordan Henderson have done a fine job in the centre of the park in the absence of Lucas and Steven Gerrard. The front three are proving to be a useful threat – this evening we should expect Daniel Sturridge to return to the starting lineup, which will probably see Adam Lallana return to the bench. 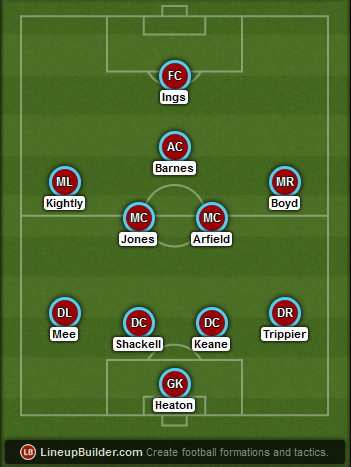 Sean Dyche likes to use a 4-4-1-1 formation and doesn’t change his side too often. The back four are settled. George Boyd is a ball of energy down the right wing. Ashley Barnes has proved a handful for opponents and Danny Ings has been doing a good job in finding the back of the net in 2015.

Philippe Coutinho vs Kieran Trippier
Philippe Coutinho ran the show at the weekend in beating Manchester City, even before he scored a stunning winner. The Brazilian came deep to collect the ball before taking on the defending champions’ midfield and defence, creating chances and threatening the goal himself. He’s capable of repeating that performance versus Burnley too. Kieran Trippier’s having a decent season in the Premier League but is set to come up against one of the best players of the season so far.

Daniel Sturridge vs Michael Keane
Rested versus Manchester City, a fresh Daniel Sturridge is something the Burnley defence should fear. Liverpool are a real force going forward with their pace and flair. While Sturridge looked off-form versus Beşiktaş, don’t rule out the England international finding his form on a Premier League-standard pitch and against one of the league’s leakiest defences.

Raheem Sterling vs Ben Mee
Raheem Sterling provided the pass that led to both Liverpool’s goals on Sunday, albeit each from 20 yards out. The youngster’s pace down the right wing should cause Ben Mee a lot of problems. He’s been outdone by the better wingers this season and we see Sterling joining that list. Liverpool have a lot of threats across their attack and at least one of them will burst Burnley’s resistance.

Prediction: Liverpool 3-0 Burnley
Liverpool are hitting their stride and a top four finish is a distinct possibility right now. We’re expecting them to continue their fine, long unbeaten run with a comfortable victory over the relegation-placed opposition. The Reds’ defence have been doing very well of late too.