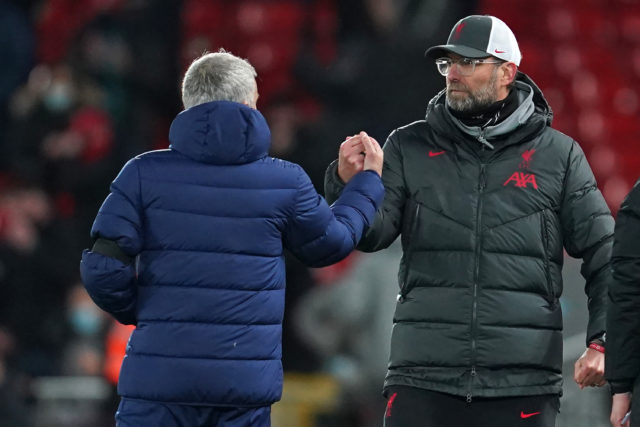 Liverpool moved to the top of the Premier League table with a 2-1 win over Tottenham Hotspur at Anfield on Wednesday night.

Mohamed Salah scored the opening goal for the Reds that took a deflection off Toby Alderweireld and looped over Hugo Lloris.

Spurs responded with a sharp counter-attack, with Son Heung-Min restoring parity before the break. The visitors created some very good scoring opportunities in the second half, but a thumping header in the 90th minute from Roberto Firmino sealed all three points for the Reds.

After the match, Jose Mourinho revealed he told Klopp that the best team had lost and that it was an unfair result.

“I told him the best team lost and he disagreed, but that’s his opinion. By the way, if I behaved the same way on the touchline like he does, then I have no chance of staying there and I’m out for a minute,” said Mourinho after the game.

Klopp obviously doesn’t feel the same way. Many Liverpool fans have taken to Twitter to express their reaction to Mourinho’s comments.

Well they can keep the "best team" title, we will keep the 3 points.

What's your definition of best team lost "Jose". You had 20% possession to Liverpool 70%.

It’s a massive attempt to deflect attention away from his negative anti-football style.

best team and you park the bus for 90mins???

Jose is rattled. Brilliant. His coach company will keep going 😄

Top of the league

Liverpool completely dominated the game, and they thoroughly deserve the win. They enjoyed 76% of possession and registered 17 shots during the game.

Spurs are well organised at the back, and it was never going to be easy to break them down. Liverpool kept on fighting till the end, and it shows their winning mentality under Klopp.

It’s remarkable that they have managed to go top of the league despite missing so many players through injury this season.

With this defeat, Mourinho is now yet to win away against Klopp in six attempts in all competitions, while Liverpool have stretched their unbeaten run at home to 66 games.

While it’s unfair to brand Spurs’ approach as ‘anti-football’, clearly the best team did win on the night.