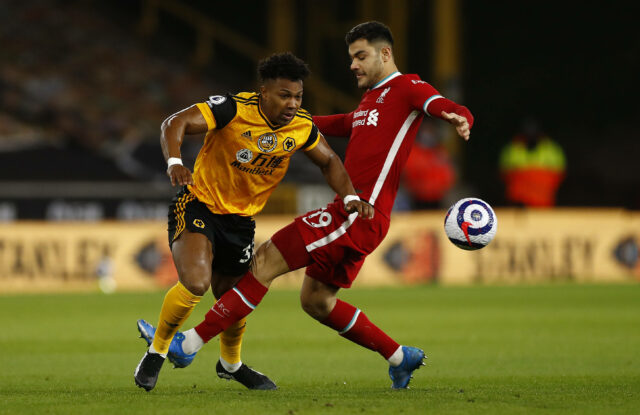 Liverpool rekindled their Premier League top-four hopes with a 1-0 victory against Wolverhampton Wanderers on Monday night.

On his return to Molineux since joining the Reds in the summer, Diogo Jota scored the only goal of the match that also saw Wolves goalkeeper Rui Patricio suffering a worrying head injury.

Wolves dominated the possession and created several good chances, but Liverpool managed to grind out the result, which Jurgen Klopp described as “three dirty points.”

For the second game in a row, Liverpool managed to keep a clean sheet with Ozan Kabak and Natt Phillips, displaying solidity at the back.

Kabak, who joined in the January transfer window on loan from Schalke, was brilliant and didn’t allow Adama Traore to influence the game.

Great performance from Centre-Backs. Especially Kabak played very well tonight. His positioning and timing were perfect and made very important touches. 4 clean sheets in 7 appearances. Not a very bad statistics for a young player who came to big team in a crisis in mid-season.

Kabak’s best & most assured performance to date in a Liverpool shirt. Aggressive in the tackle, but calm & progressive on the ball.

Something to build on & my MOTM. #LFC

It was a solid defensive performance from the young Turkish defender. He made two tackles, three interceptions and six clearances during the game.

The centre-back pairing of Kabak and Phillips has allowed Fabinho to move into midfield. With Naby Keita also fit, the midfield will get stronger when Jordan Henderson returns next month.

Liverpool are five points behind fourth-placed Chelsea. The Reds are well capable of closing the gap, but they need to maintain a winning run for that to happen.

In other news, Liverpool will listen to offers from Divock Origi.