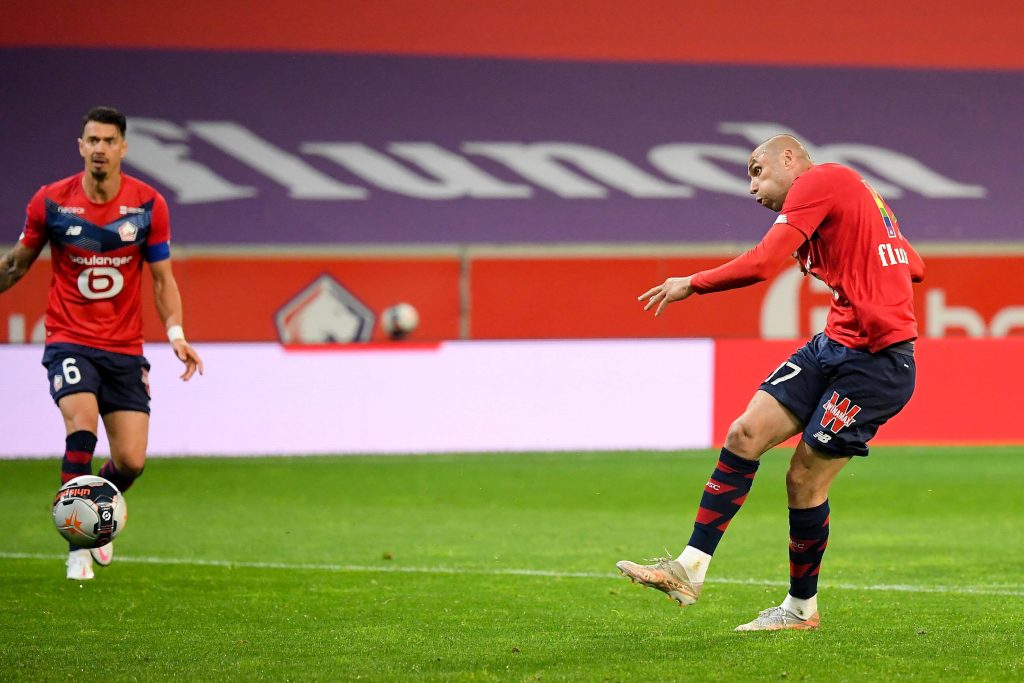 The 2020/21 Ligue 1 title race goes down to the wire as three sides battle it out for the ultimate prize on the final matchday of the season.

League leaders Lille harbour a slender one-point lead on second-placed Paris Saint-Germain ahead of the final round of fixtures, with Monaco in third lurking in the shadows.

Les Dogues hold the Ligue 1 title reins firmly in their hands as they head to the Stade Raymond-Kopa to tackle injury-hit Angers.

Third-placed Monaco have an outside chance of claiming their first Ligue 1 crown since 2016/17. Sitting three points adrift of pacesetters Lille, the club from the French principality make the trip to newly-promoted Lens for Sunday’s showdown.

While they remain in contention for what would be a sensational success given the chances they were given before the beginning of the season, Les Monegasques could also end up losing a place in next season’s Champions League.

Fourth-placed Olympique Lyon are breathing down Monaco’s necks as they head into the season finale just a single point off Niko Kovac’s side.

Taking on mid-table Nice at the Groupama Stadium in the final fixture gives Les Gones an ounce of hope they could return to Europe’s most prestigious club competition after a season-long absence.

When Christophe Galtier took over the reins at the halfway point of the 2017/18 campaign, Lille were stuck in a mid-table crisis and without any long-term plans moving forward.

The 54-year-old has had a galvanising effect on Les Dogues, turning a somewhat disoriented team into genuine title contenders.

Fast forward three years, Lille stand on the brink of pulling off an astonishing success, having defied all the odds throughout an exhausting season. The Frenchman himself could win his first Ligue 1 title as a manager.

Galtier’s men are one win away from ending PSG’s three-year tenure in Ligue 1 as Angers stands in the way between them and their first domestic triumph since 2010/11.

The former Saint-Etienne boss has shored up Lille’s defensive problems, with his side conceding a league-low 22 goals this season.

They now face a side they have failed to shut out in five of their six top-flight away meetings. The current leaders will still be keen to exact revenge for a 2-1 defeat in the reverse fixture earlier in the season,

Mauricio Pochettino’s job could be on the line

PSG fired Thomas Tuchel in January after a string of underwhelming results and appointed Pochettino head coach, hoping he would be the catalyst to bring Les Parisiens to their first-ever Champions League title.

Well, the move has not worked out as expected so far. The reigning French champions suffered a disappointing Champions League semi-final exit to Manchester City and are now on the verge of surrendering the league crown to Lille.

Following his brilliant work at Tottenham, Pochettino was expected to bring stability and instil the same principles at the Parc des Princes.

But except for a 2-0 win against Monaco in the Coupe de France final in midweek, PSG have barely improved during his reign.

Mere cup success is not what PSG chiefs had in mind when they handed Poch a lucrative contract at the beginning of the calendar year.

Although a trip to 16th-placed Brest may look to be a routine task at first glance, the hosts are also under pressure and will fight tooth and nail for the result that would ensure another season in the top flight.

Regardless of what happens in Angers, PSG must win at the Stade Francis-Le Ble to keep their title hopes alive. All but a victory would see them miss out on a fourth consecutive Ligue 1 title.