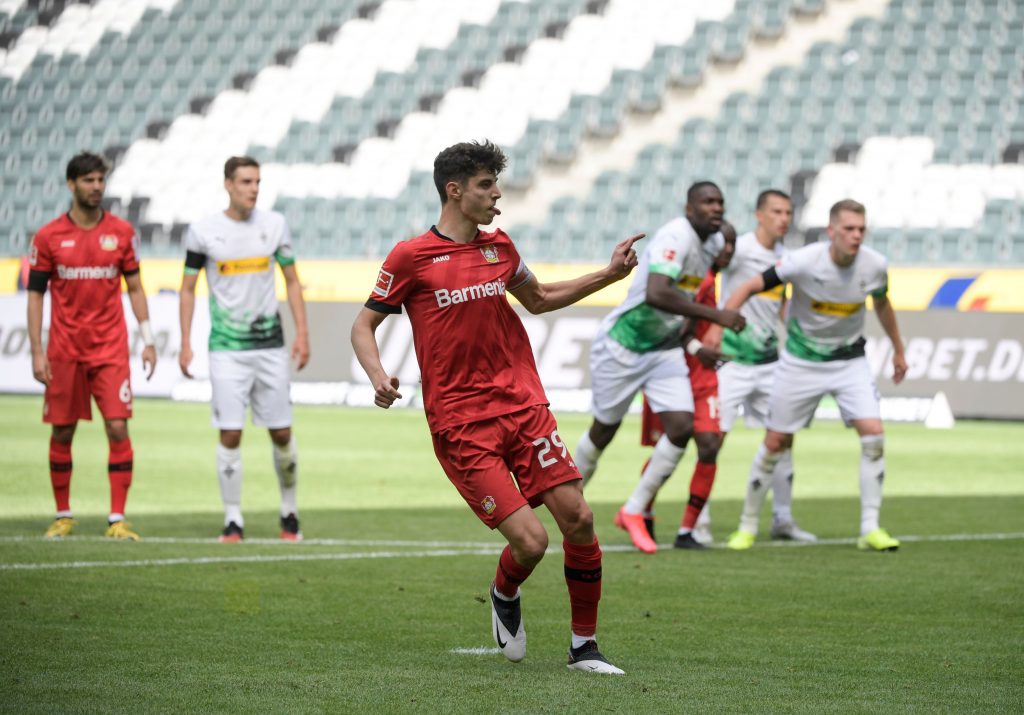 Gladbach welcomed Leverkusen for the Rhine derby, as cardboard fans filled the stands in Borussia-Park for the second matchday since the restart of the Bundesliga. Leverkusen got off to a lightning-quick start, and they were rewarded for it when Bellarabi played Havertz through, who calmly slotted home with a brilliant finish.

Leverkusen dominated possession in the first half as Aránguiz and Demirbay controlled the midfield. The foals had a rare chance in the 42nd minute as Neuhaus had a hit from range after a half-cleared corner, which Hrádecký spilled, but he managed to keep it away from the Gladbach players before Aránguiz cleared.

3 minutes later Leverkusen almost doubled their lead as Havertz hit the crossbar, and the ball rebounded for Bellarabi, who had his effort heroically cleared by Elvedi.

The second half saw Gladbach pushing more, and they got their reward when Pléa located Thuram with a perfect pass, and the Frenchman thumped it home.

But just a few minutes later, Elvedi collected Bellarabi in the box, and Havertz converted the penalty rather unconvincingly, as Sommer got a hand to it but couldn’t keep it out.

Gladbach were far better in the second half and were able to cause lots of problems with their aerial balls.

But then in the last 10 minutes, Demirbay whipped in a brilliant ball from a free-kick, which Bender bundled home. The game ended 1-3 to the away side. 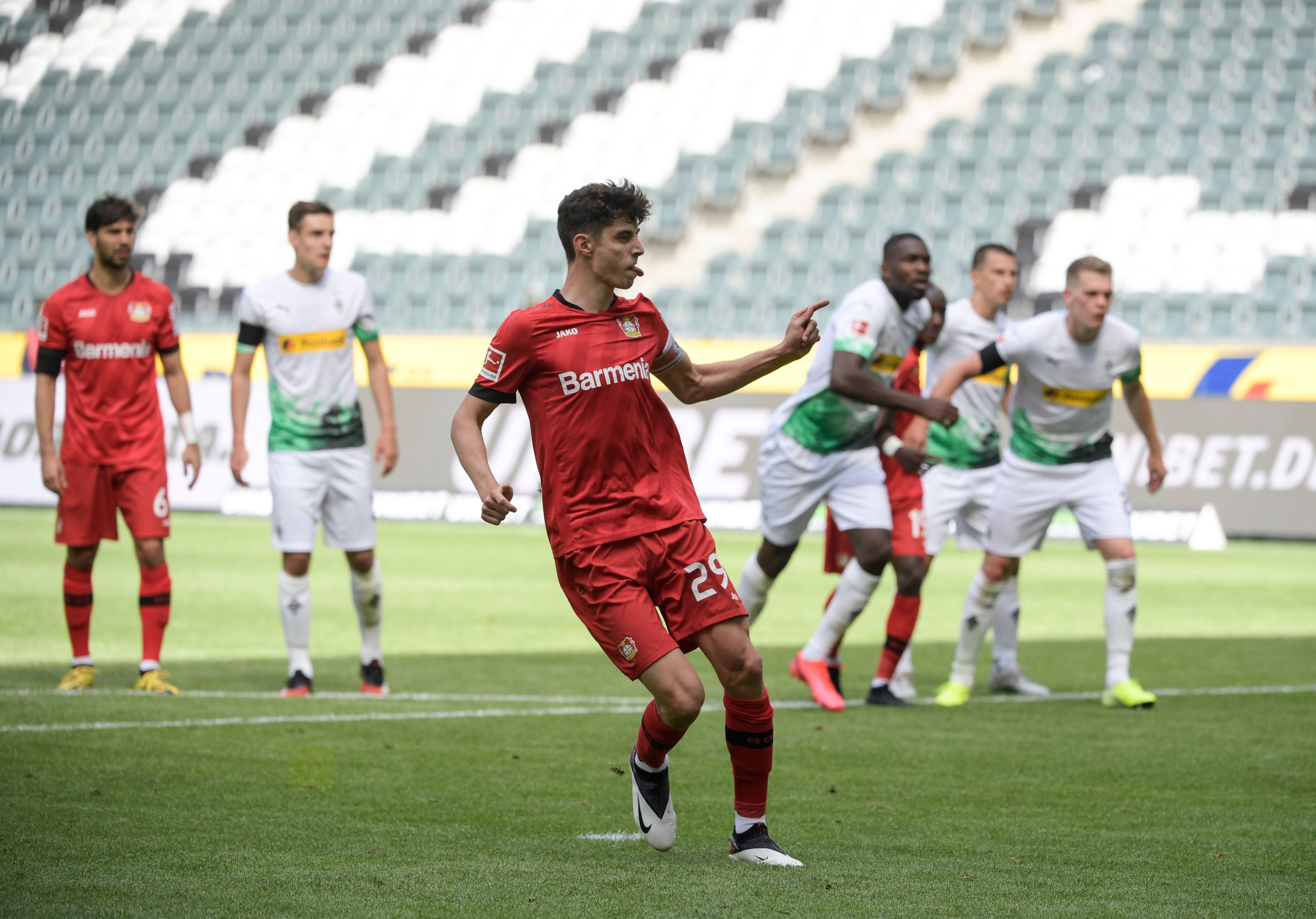 Leverkusen dominated possession and were far more attack-minded. Their quick and precise passing and build-up play made it even more difficult for the home side. Aránguiz and Demirbay were all over the midfield, as Havertz and Diaby caused problems to Gladbach defence by exchanging places often.

The second half saw the Gladbach full-backs push more, as they shifted to a back 3, and this extra push helped them in attack. They relied on the physique of Thuram as they lobbed balls towards him in way of attack. But after he was substituted, their attacks lacked threat.

Central Midfield – Aránguiz and Demirbay won the battle by a great margin in the first half, as Neuhaus and Strobl were nowhere near them. The second half saw a resurgence from the Foals, but Aránguiz’s defensive work and Demirbay’s attacking brilliance won the game at the end of the day.

Yann Sommer – His distribution was good, and he made a few decent saves too. He almost saved the penalty, as he got a hand to it but couldn’t keep it from going in. 6.5.

Stefan Lainer – Did well to contain the rapid Diaby and Havertz at times when they switched. Made contributions in attack too with his runs down the right flank. 7.

Matthias Ginter – He was overrun by Havertz and Diaby throughout the match. 4.

Nico Elvedi – Made a heroic clearance in the first half, but then needlessly collected Bellarabi to give Leverkusen a penalty just after his side had equalised. 5.5.

Ramy Bensebaini – His misplaced pass led to the Leverkusen goal, he was nowhere near Bellarabi either. He was an attacking threat, but couldn’t make anything substantial happen. His rash challenges almost earned him a red card, and he was the one who gave away the free-kick which led to Bender’s goal. 3.25.

Florian Neuhaus – Was largely overrun in midfield, and failed to affect the game much. 4.

Tobias Strobl – Did some decent defensive work, but couldn’t contain Demirbay for most of the match. 4.5.

Jonas Hofmann – He was mainly involved through his set-pieces, which were decent. Largely uninvolved in open-play, though. 5.

Alassane Pléa – Was largely uninvolved in the game, but grew into it in the second half, and manufactured a brilliant ball for Thuram’s goal. Should have scored when Wendt gave him a cross on a plate, but he put it wide. 5.5.

Breel Embolo – Picked up an unfortunate injury early on which saw him substituted in the 12th minute.

Marcus Thuram  – He was the only real attacking threat for Gladbach. Individually, his dribbles were brilliant, but he was unsupported and couldn’t do much alone, except when he was fed brilliantly by Pléa, when he finished emphatically. In the second half, he was the target man for the Foals, and he used his physique to the best of its abilities. His links to Liverpool seem justified after this performance. 7.5.

Lars Stindl – Largely uninvolved in the first half, but was far better in the second, as he controlled the Gladbach attacks. 6.

Team – Gladbach were second-best in the first half, but a half-time switch to a back 3 saw them grow into the match. They played some entertaining football in the second half, but there was a big gulf in quality in the midfield, and that is where the game was lost. Overall, they can take a few positives but still have a lot to work on. 6.5.

Lukáš Hrádecký – Made lots of crucial saves to keep Leverkusen ahead for most of the game. 7.75.

Aleksandar Dragović – He was brilliant in his first start in 2020, as he marshalled the defence for the away side. 7.25.

Sven Bender – Was solid in defence, and scored with a brilliant header late on to seal the deal for Leverkusen. 7.5.

Edmond Tapsoba – He was solid at the back, and didn’t let anyone past him. His passing and attacking contributions were valuable too. 7.5.

Mitechell Weiser – He had the tough job of containing Thuram, which he did decently in the first half, but as Thuram roamed more after the break, he couldn’t quite keep up with him. Offensively, he was largely uninvolved as he mainly tried to stop Thuram. 5.5.

Charles Aránguiz – Ran the midfield and worked his socks off in his holding role. Made a crucial clearance to keep Leverkusen in front towards the end of the first half. 7.25.

Kerem Demirbay – He controlled the away side’s attacks with his brilliant distribution and dribbling. Whipped in a wicked ball for Bender’s goal. He could have had a goal as well when he faced an open goal twice, but he was denied by Elvedi on the first occasion and skied it on the second. 7.75.

Daley Sinkgraven – He was a constant threat down the left, and he managed to contain Hoffman throughout the match.  6.75.

Karim Bellarabi – He was absolutely scintillating down the right. His assist for Havertz’s first goal was exquisite, and then his pace and skill won him a penalty just after Gladbach had equalised, when Elvedi brought him down. 7.75.

Kai Havertz – Converted the first chance he got with a controlled finish, and he continuously tormented the Gladbach defence with his runs. He was everywhere – making runs n behind, supporting in midfield and even swapping with Diaby to play down the left flank. His penalty was not the best, but got him the goal so you can’t complain about it. He dwindled as the second half drew to a close. 8.25.

Moussa Diaby – Tormented with his pace but his end-product could have used improvement. He grew better in the second half, and his dribbling caused problems to the Foals’ defence. He was all over the pitch in attack, as he started on the left, exchanged with Havertz to go central and ended on the right. 8.

Leon Bailey – Caused problems with his pace but his passing could have used improvement. His decision making was poor. 4.

Team – Leverkusen were brilliant throughout the match, but especially in the first half. Their attacking unit worked together perfectly, and they were strong defensively too. Their passing and build-up play were a clear mark of the impact that Peter Bosz has had on this side. 7.75.

Leverkusen have now leapfrogged Gladbach to go third in the Bundesliga table. Even if Leipzig win tomorrow, they will maintain their Champions League spot, with Gladbach dropping to fifth. This may end up being the final nail in the coffin of Gladbach’s title charge, and unless the leaders slip up, we may have a 2 or 3 horse race for the Meisterschale.