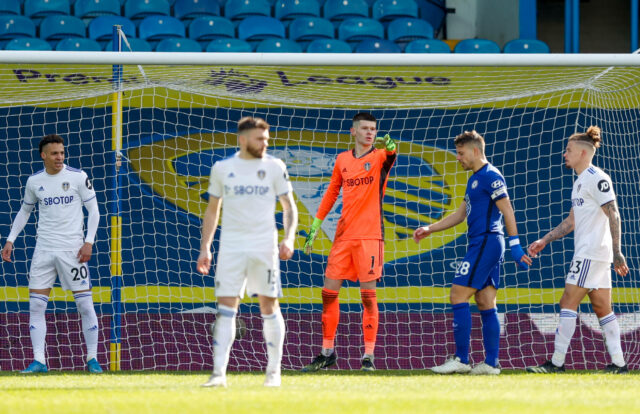 The Whites are without a win in their last three games, but they are heading into this match on the back of a strong 0-0 draw against Chelsea.

If they manage to keep another clean sheet tonight, Leeds goalkeeper Illan Meslier will create a new Premier League record.

The 21-year-old will become the youngest keeper to keep 10 clean sheets in a single season, surpassing the record set by Joe Hart.

⛔️ @MeslierIllan has kept nine clean sheets in the #PL this season

If he keeps another one during #FULLEE, he’d be the youngest keeper to reach 10 shutouts in a single season in the competition (21 years and 17 days) pic.twitter.com/QGYzQzTyAy

The French goalkeeper cemented his position in Leeds first-team towards the end of last season in the Championship when Kiko Casilla was given an eight-game ban.

The young goalkeeper has faced criticism this season, as Leeds have conceded plenty of goals. Against Manchester United, they conceded six, while Liverpool scored four past against them.

However, Meslier hasn’t always been protected with a steady backline due to injuries to key players – Liam Cooper, Diego Llorente and Robin Koch – at various points.

Meslier has shown great presence, leadership and command in the box, and he is now on the verge of a new Premier League record.

Marcelo Bielsa has defended the youngster whenever he was criticised by the press. After his mistakes against Arsenal, Bielsa protected him by drawing reference to Liverpool goalkeeper Alisson Becker who has made some uncharacteristic errors this term.

Popular football pundit Tony Cascarino has hailed Meslier as “exciting”, suggesting his job as “the most demanding in the Premier League”.

He claimed that Meslier is getting better and assured with “every passing week” and predicted that he could become the future first-choice goalkeeper for France.

In other news, Mark Lawrenson has predicted a 2-0 win for Leeds vs Fulham.