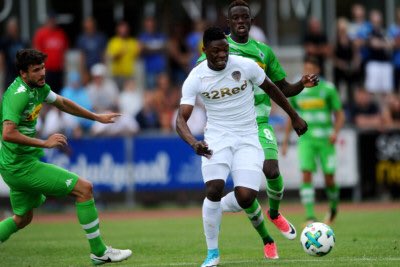 Leeds United secured a 2-0 win over Barnsley in the Championship earlier today.

The Whites were under tremendous pressure after the thrashing against Wolves and Christiansen will be relieved with today’s result.

The 44-year-old is losing the patience of the fans and he will have to earn their support by putting together a winning run now.

The Leeds faithful reacted to today’s performance against Barnsley on Twitter and it seems that one particular player has impressed them a lot.

The 22-year-old forward displayed breathtaking pace against Barnsley and his defensive contribution was immense as well.

The former Chievo star joined Leeds United on a four-year contract for an undisclosed fee earlier this summer. If he can keep up this level of performance for the rest of the season, he could well turn into a fan favourite at Elland Road.

Here is what the Leeds fans had to say about his performance on Twitter today.

Ekuban has covered a mammoth amount of ground today, in fact he’s just served me in Stanningley Tesco. #lufc

Literally everywhere you looked Ekuban was there, trying to help the team out and make himself useful. Proper put a shift in.

Ekuban has looked excellent both on and off the ball. Hope he can add goals to his game! #lufc

Bet the fans who overreacted on Wednesday look stupid now.

Feel Ekuban is gonna be a real fan favorite here. His workrate is second to non, he puts himself about, doesn’t mind a tackle & is always trying to bring the other attackers into play.

Could have found a gem here. #lufc

Ekuban’s got such a good attitude. Comes across as such a decent lad in interviews too. Can’t wait for him to get his first league goal. #lufc

Was incredible today. Much prefer Ekuban/Roofe up top to Lasogga