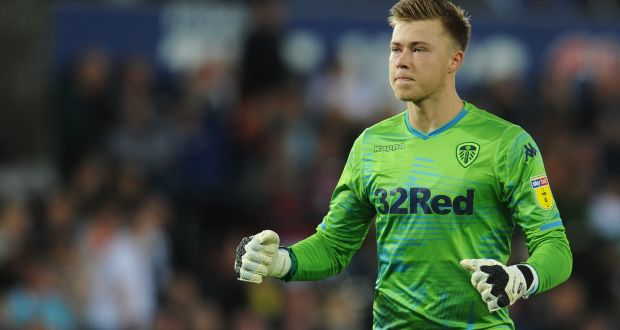 According to reports from the Yorkshire Evening Post, Leeds United have received interest for goalkeeper Bailey Peacock-Farrell from Premier League outfit Burnley.

The Clarets are keen to sign the Northern Ireland international as a replacement for Tom Heaton who has agreed a £8 million deal to join Aston Villa.

The 22-year-old is a good goalkeeper and was the first-choice for Marcelo Bielsa in the opening half of the season. However, the Argentine boss prefers Kiko Casilla in goal now, and as a result Peacock-Farrell is keen to join a club where he will be getting regular games.

Some Leeds fans have taken to Twitter to express their reaction after the news broke out. Here are some of the best reactions:

He will definitely go as he won’t get in the first team and he said he’d leave it he doesn’t get first team.

That’s it #lufc just keep selling… We don’t have long now so I’m bloody hoping you have some transfers lined up, even if its a cb and forward. Show us the money rads and get some incomings announced. With the nature & speed of our game we’ll be knackered by Jan/Feb ?

I suppose Radz will try and get as much cash for the kitty before he sells up.

Hes not going to get “guarantees of first team football at burnley” is he? They still have Hart and Pope ahead of him at least. Why would you not stay and compete for position? Casilla is clearly prone to mistakes

Has to be another coming in then….surely, ?

If he goes will it be Miazek the replacement or a direct one from the market, feel like Miazek could come good with his potential but wouldn’t be against getting a better quality keeper right now to challenge with Kiko

If he doesnt get game time at Leeds, why would he go to Burnley to sit on their bench? Not arsed if he goes, but I’d be surprised if he actually wants to.

Peacock-Farrell came through the academy at Thorp Arch, and went on to represent the senior team. He made 29 first-team appearances last season.

Sky Sports are reporting that Burnley have made an offer already for Peacock-Farrell. If Leeds sell him, surely Bielsa has plans to replace him.