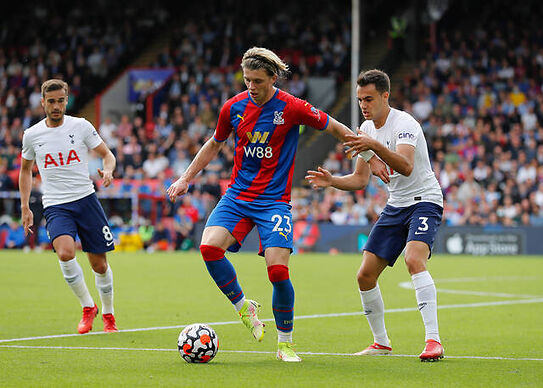 Leeds United fans took to Twitter to express their reactions to the performance of Conor Gallagher for Crystal Palace against Tottenham Hotspur on Saturday.

The Eagles registered their first win of the 2021-22 Premier League season after beating London rivals, Spurs 3-0 on Saturday at Selhurst Park.

Wilfried Zaha opened the scoring from the spot for the home side in the second half.

Odsonne Edouard, the summer signing from Celtic, scored a brace on his debut, to earn all three points against the north London club who went down to 10-men in the second half after Japhet Tanganga was shown the marching order for picking up two yellow cards.

One player who really impressed for Patrick Vieira’s side was Conor Gallagher. The 21-year-old joined Palace on loan during the summer from Chelsea and has made a strong impact already.

Popular talkSPORT pundit, Jamie O’Hara showered heaps of praise on the youngster on Twitter, suggesting he was a “different class.”

Many Leeds fans felt Gallagher was superb during the game, and suggested that he would have been a superb signing for the club.

Good God Gallagher would have been absolutely perfect. Such a shame, he would have been the perfect long term development of the midfield. Someone like him should be playing week in week out though. You can understand the Palace choice. #LUFC

Connor Gallagher would of improved out team so much #lufc

And Gallagher picked these over #LUFC? This is bloody painful to watch. #CRYTOT

What a shame we did not get Connor Gallagher, he is playing a blinder for #cpfc v #THFC in just the position we need at #lufc

Gutted we never signed Gallagher…exactly what we needed #lufc

Gallagher was heavily linked with a move to Leeds during the summer transfer window, but the Chelsea youngster chose to join Palace instead.

Leeds were looking to sign a midfielder this summer but they ended up landing the Wales winger Daniel James from Manchester United.

The Whites will face Liverpool today in the Premier League clash at Elland Road. Marcelo Bielsa’s side are yet to register a win so far.