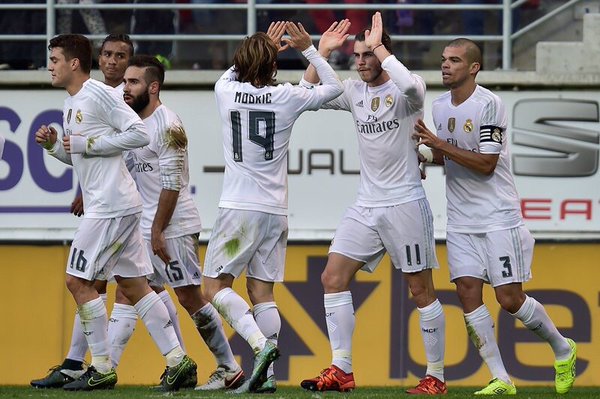 Real Madrid closed the gap with Barcelona to six points after winning 2-0 against Eibar on Sunday. Cristiano Ronaldo and Gareth Bale both scored for Los Blancos to ease the pressure on manager Rafael Benitez.

On Saturday, Real Sociedad had no answers before Barcelona’s scintillating football display, where MSN trio scored in the 4-0 win for Blaugrana.

Elsewhere, Nuno Espirito Santo has resigned as Valencia coach following Los Che’s 1-0 defeat at the hands of Sevilla. Aduriz scored a hat-tick for Bilbao, Atletico’s win over Espanyol and a lot more to discuss, but before let’s check the latest results, and the La Liga table after week 13. 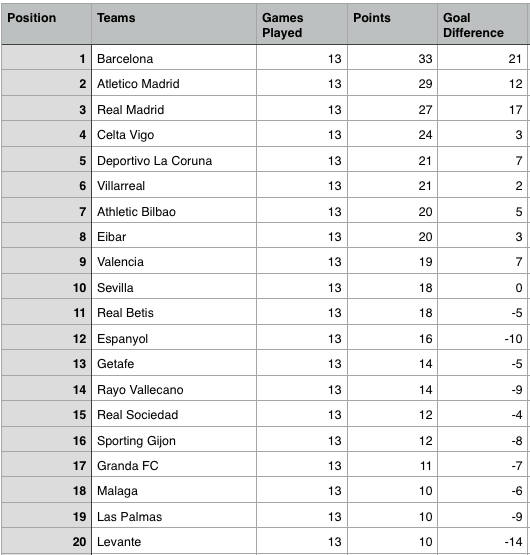 Barca – The juggernaut rolls on

Barcelona ended the month of November with five wins out of five, but nothing would have pleased Luis Enrique than seeing Lionel Messi returning to full fitness and the MSN trio firing all cylinders again. Neymar probably has been playing the best football of his life, as the Brazilian currently leading the goal-scoring chart with 14 goals to his name. Not far behind is his teammate Luis Suarez, who has scored 12 goals so far in the La Liga. Messi, drafted into the starting line-up in the league for the first time since returning from injury, etched his name on his scoresheet against Real Sociedad in his 600th career appearances. With Barcelona leading by four and six points from Atletico and Real Madrid respectively, things can only get better for them, when Arda Turan joins the squad in January.

For the best part of October and early November, Madrid press devoted their time speculating why Ronaldo is not happy at Madrid. Is he getting bored with Rafael Benitez’s defensive tactics? Is he angling a move elsewhere – a possible return to Manchester United? Is he unhappy with his teammates, and especially with the record signing Gareth Bale?

Like a Phoenix rising from the ashes, Ronaldo seems to have woken from the slumber and regained his old mojo back. The Portuguese scored twice against Shakhtar in the Champions League (assist from Bale), and was on target again on Sunday against Eibar, where Bale also got his name on the scoresheet.

However, Madrid press were still left unimpressed with Benitez, with both AS and Marca describing in their post Eibar-Madrid match report as a hard earned victory, full of struggle but little imagination. For God’s sake, give him a break, will you?

Atletico are defensively such a well drilled team that they’re capable of churning out narrow margin victories on a regular basis. You won’t see them scoring 3-4 goals on a regular basis, rather they are expert in grinding out results.

Nuno leaves Valencia – what next for Los Che?

After four defeats and four draws in the opening 13 games, Nuno Espirito Santo, the manager who guided Valencia to top four finish last season, has resigned from the post.

“I spoke with the President and board before the game, but the players didn’t know [my decision until now]. I’m an employee and I’d like to thank everyone,’ he said after the game. “It’s important that the Valencia fans stick together. Managing Valencia has been an honour.”

Valencia invested a lot of money in buying talented players in the summer, but the huge outlay did not translate into success on the pitch, with Los Che dropping to eight in the league and facing an early elimination from the Champions League as well.

Spain boss Vicente del Bosque has surprisingly kept his confidence on misfiring Diego Costa while other top Spanish strikers in the league are being neglected. The Chelsea striker has scored only four goals all season, and has come under criticism from Jose Mourinho and the fans for his non-professional behaviour at times.

It is indeed baffling why Del Bosque continues to ignore other top strikers in La Liga. One such example is Aritz Aduriz, who has scored 20 goals in all competitions so far, five goals in last two matches, including a hat-trick against Rayo Vallecano on Sunday. Despite being 34 years of age, Aduriz deserves a recall to the Spain national team.