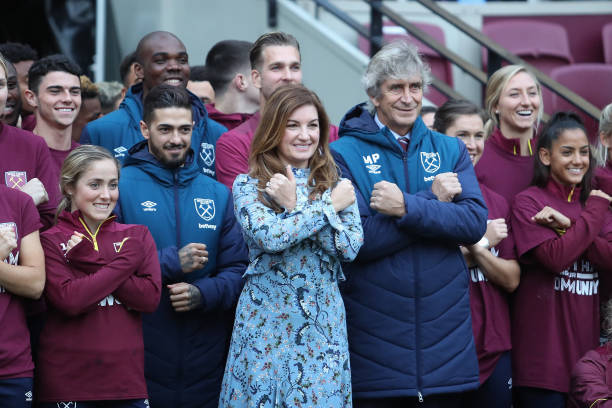 West Ham United will look to pick up their first win in eight league games when they face Chelsea today, and failure to do so could prove catastrophic to manager Manuel Pellegrini’s reign.

The Hammers have lost five and drawn two of their last seven games, and the Chilean is under a lot of pressure, with a couple of names already linked with his job.

Pellegrini is still hopeful of leading West Ham to Europe despite their underwhelming start to the campaign, and vice-chairman Karren Brady has backed him to turn things around.

“Manuel Pellegrini is a proven winner in this league with an unshakable determination. Everyone is behind him to bring about a change of fortunes and we all know he and the team are capable of doing just that,” the Hammers chief told The Sun.

“There’s no doubt that to get back to winning ways we need to show the spirit so widely associated with our great club, personified by so many of the great players who have worn the claret and blue. We all need to find our back bone and, most of all, we have to stick together.

“There’s a lot of talk of leaders under pressure at the moment, whether it’s international or domestic politics, current affairs or sport. But pressure is something these individuals are accustomed to every day — it’s when they can really show their mettle. And I fully expect our manager to show our supporters his because he has it in spades.”

Chelsea have lost just thrice this term, and they will be looking to immediately bounce back from last weekend’s defeat to Manchester City by getting a win against West Ham.

Pellegrini’s men have a tough task on their hands at Stamford Bridge, and it will be interesting to see how they fare against Lampard’s youngsters.