At present the Casa Blanca doesn’t remotely resemble a house that is in order. After wrestling back La Liga from eternal foes FC Barcelona in 2011/12 in record breaking fashion, Real Madrid currently find themselves 13 points off the summit of the Spanish League and their heated rivals.

To add insult to injury, Los Blancos even trail city rivals Atletico Madrid by 4 points. The current state of affairs at the Spanish capital probably contributed to the fact that the story of a certain Brazilian has become somewhat lost amidst all the misery emanating from the Santiago Bernabeu.

Once a coveted superstar who was awarded both, the Ballon D’Or and FIFA World Player of the year, he’s now valued less (€18 million) than football’s poster boy for erratic and irritating behavior, Mario Balotelli (€32 million), when he really should be enjoying the peak years of his career.

His 2009 transfer from AC Milan to Real Madrid for a staggering €68.5 million ranks as the third highest operation of its kind (behind Barcelona’s €69.5 million fee for Zlatan Ibrahimovic and teammate Cristiano Ronaldo’s world-record €94 million paid in the same summer).

Though Ibrahimovic’s tenure at Barcelona wasn’t necessarily a failure, he was hardly a success story either. By anyone’s account Paris Saint-Germain’s new talisman had a good season in Catalunya.

Still, playing second fiddle to Lionel Messi wasn’t to Ibrahimovic’s liking. Probably football’s most volatile ego the Swede opted to return to Italy, ironically, via AC Milan. Say what you will about Ibra but he actually cares enough about his career to admit defeat and return to start anew.

While El Niño still enjoys the trust of Chelsea owner Roman Abramovich (making him de facto untouchable), Kaka has ignored the writings on the wall. The arrival of Cristiano Ronaldo just a few days after he signed for Real Madrid should’ve been the first indicator.

Los Blancos were always going to make Ronaldo their focal point, not Kaka. At Milan he facilitated all attacks of the Rossonieri; he was arguably the best counter-attacking player in football. But Ronaldo is that, and then some. Still, in 2009 and when fit, Kaka could have been labeled a first team regular.

However, in 2010 he was really pushing his luck when he signed up for international duty with the Brazil national team at the World Cup in South Africa. With Real Madrid he played a total of 33 official matches during the preceding 2009/10 campaign, indicating he was either injured, not fit or both.

A couple of weeks after the conclusion of the World Cup he picked up an injury that would sideline him for the remainder of the calendar year. One is inclined to believe that Kaka wasn’t 100 percent fit when he entered the tournament in the first place.

Thus the events that have followed his injury are partly his fault. Real Madrid were forced into action and signed a relatively (whatever that is in Real Madrid lingo) cheap (€18 million) replacement in the form of Germany international, Mesut Özil. The idea behind it – sign a talented replacement who could become an understudy to Kaka once he returned from injury.

The problem is/was: Mesut Özil has absolutely no intention of becoming anyone’s understudy, least of all Kaka’s. Ever since he signed for Real Madrid he has been a mainstay in Jose Mourinho’s XI, at the expense of the Brazilian.

Even worse, he’s one of the most popular Madrid players, a hit with fans and teammates alike. Talk about self-made problems. 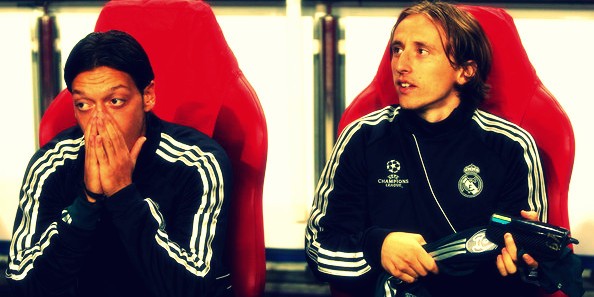 Perhaps Kaka should’ve taken a cue from Ibrahimovic and left Madrid at the first opportunity. Being proud and stubborn rarely yields any kind of return. Some dreams just aren’t meant to come to fruition. His situation at Madrid hasn’t improved either, it has actually worsened.

The capture of Luka Modric, from the Premier League, of Tottenham fame for a reported €40 million has further complicated his already undesirable situation. While Modric is a Xavi-esque midfielder who likes to operate from deep, he’s also adept at Kaka’s preferred attacking midfield role behind the main striker (currently occupied by Özil).

When competing with Mesut Özil has already proven to be an obstacle, where exactly does the signing of Modric leave Kaka now?

The media seems to have identified three potential destinations for the once coveted Kaka – football’s Florida alias the world’s foremost retirement home for old players, the MLS, the Brazilian championship and the Russian Premier League.

Clubs that are rumored to be interested in the devout Christian are Santos FC, mega-rich Anzhi Makhachkala and LA Galaxy who just recently bid farewell to another ex-Madridista, David Beckham, and could use a replacement for the departed Englishman.

The backwaters of football aren’t really befitting the stature and ambitions of a player of Kaka’s caliber. But then again, with Financial Fair Play on the horizon, who is willing to take a gamble and pay massive wages (a reported €9 million per annum) for a 30 year old?

The major issue with Kaka is: he hasn’t played regularly for the better part of 2 years, 3 even.

For all intents and purposes – Kaka is the world’s preeminent bench-warmer. Instead of leaving and restarting his career elsewhere years ago, he remained defiant in his ambition to succeed at Real Madrid. On the pitch Kaka was one of the most explosive players, off the pitch he appears a little slow.

Ibrahimovic’s decision to take a detour to Italy paid rich dividends, at the ripe age of 31 he earned himself another big-money transfer (€24 million) to Paris Saint-Germain. Not only that, he’s now the second best paid player in the world (on a rumored €14 million annually) after Anzhi’s Samuel Eto’o (who’s earning a mind-blowing €20 million a year).

Unless the Russian side does enter the race for the Brazilian there’s arguably no chance he’s going to command a high transfer fee or a higher salary. Whereas Ibrahimovic is the undisputed superstar in France, Kaka isn’t undisputed anywhere these days.

Not at Real Madrid, not in Spain, least of all in Brazil where Neymar is king among his compatriots.

The story of a Kaka is indeed a sad one (provided one can feel empathy for rich professional footballers). He’s fit, he’s available and yet nobody (none of the elite clubs) is interested in him. A couple of years ago the world laid at his feet, nowadays he’s career at the top of European football is all but over.

Unlike Ronaldinho, Kaka’s undoing was not the lack of discipline (he lives a very unassuming life and is very un-Galactico-like in that regard) but pride, which is ironic since he’s a very devout Christian.

In the end Kaka has no one but himself to blame.