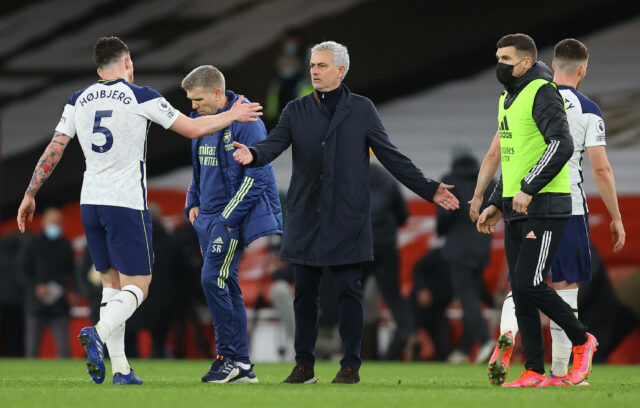 Tottenham Hotspur suffered a 2-1 defeat against Arsenal in the Premier League on Sunday.

Former Spurs midfielder turned popular football pundit Jermaine Jenas has suggested that the recent improvement in form looks like a ‘lie’ after the north London defeat.

Spurs picked up wins against Burnley, Fulham and Crystal Palace and won their Europa League games ahead of this fixture. They looked to be in good form.

Jenas said that the recent victories gave the impression that “this season could be unbelievable” for Spurs.

However, the manner of the defeat feels like a massive step backwards.

“It was all looking good,” Jenas told BBC Sport. “They have got the Carabao Cup final to look forward to, they have got one foot in the quarter-finals of the Europa League, and they are in touching distance of the top four.

Potentially, with the way they had started playing, I had thought this season could be unbelievable.

“Then, one performance later, I am left thinking that, no, it was all a lie.”

Jenas is absolutely spot on here. While Spurs fans can argue about the controversial penalty decision all day long, the fact remains they were pretty flat throughout the game.

There were dreadful. They lacked imagination, and questions can be raised about Jose Mourinho’s tactical set up once again.

We have seen a countless number of times this season that Spurs adopt a negative strategy while playing against a decent side, and it was evident once again.

They sat deep, soaked up pressure and allowed Arsenal to play on the front foot. Eventually, they had to pay the price for it.

In other news, check the match report from the north London derby.