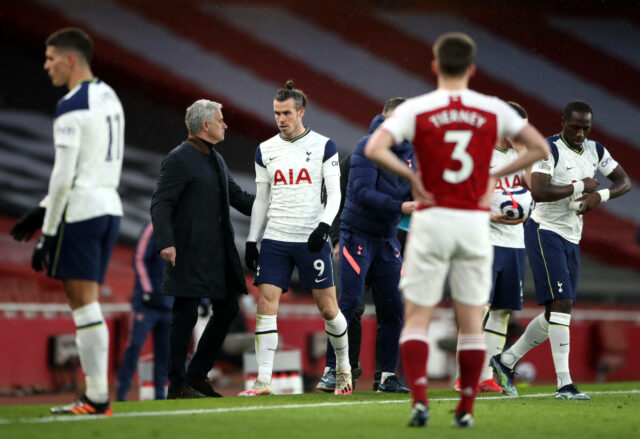 Tottenham Hotspur lost 2-1 against Arsenal in the Premier League on Sunday.

Jermaine Jenas has criticised Jose Mourinho’s negative approach in big games and feels that the Portuguese boss might have strained his relationship with Gareth Bale once again.

The Welshman has looked impressive in recent games and gave the hint of returning to his old best. He started the game against the Gunners but was taken off in the 57th minute.

Jenas said on BBC Sport Match of the Day that the combination of Bale and Matt Doherty on the right side proved to be a weak link.

The former Spurs midfielder has suggested that the match was won and lost elsewhere.

Jenas said: “But that is not where the game was won and lost – Arsenal were much the better side, and they ended up winners because they approached the game in a really positive way, they were brave on the ball, and they showed their quality.

“In contrast, Tottenham’s approach stank of a Mourinho who was more concerned with Arsenal than his own team, and showing what Spurs could do. He didn’t set them up to win that game – he set them up worried about what the opposition can do to them.”

Spurs looked dreadful, unimaginative and they hardly created anything in the first half. Apart from Erik Lamela’s individual brilliance, there was a severe lack of creative effort from the visitors.

Mourinho’s team sits deep, absorbs pressure and look for a counter in big games. And this strategy has failed to get the best out of Bale, who managed to produce only 17 passes during the game.

Jenas added: “To add a bit of salt to the wound, Spurs have lost Son for what could be the best part of six weeks with his hamstring injury – and they have potentially lost some of Bale’s allegiance to the cause too.

“If I were Bale, I would be annoyed at being dragged off before the hour mark of a north London derby because I would be looking around thinking I’ve been no worse than anyone else here.

“Mourinho might just have sent that relationship back to ground zero as well.”

Bale has done well in recent games to build-up his confidence. Jenas is absolutely spot on here.

The Welshman failed to make an impact at the Emirates Stadium, but Mourinho’s approach also didn’t help to allow the players to play with freedom. Even Harry Kane was extremely quiet until Lamela was sent off.

In other news, Gary Lineker and Jenas have shared their views on the controversial penalty decision.