Spurs fans will no doubt have to pinch themselves numerous times this week, maybe even dunk their heads in a bucket of ice cold water (to wake themselves up, not to ease their hangovers) as they joined Europe’s elite set of football clubs on Wednesday, and did so with a swagger, taking apart the Swiss outfit Young Boys.

Peter Crouch and co. produced a rousing performance which meant that last weeks half – hour horror show at the Stade de Suisse was soon forgotten and dreams of playing at the Camp Nou, The Bernabeu and the San Siro where soon restored. As if thoughts of such ventures weren’t enough, the Spurs faithful will be licking their lips at the prospect of welcoming the likes of Lionel Messi, Wesley Sneijder and Cristiano Ronaldo to the Lane, where they will no doubt create a fantastic atmosphere aided by their plastic flags and a wall of noise, with the opportunity of creating some historic nights.

Hold on, there is something not quite right about that last sentence. ‘…a fantastic atmosphere aided by their plastic flags…’ This unfortunately does not sit right with me. Why are such aides needed at such a massive game for Tottenham?

Surely these flags can’t create any more of an atmosphere; the atmosphere should be fantastic regardless, Spurs fans have proven in the past they can create an intimidating environment for visitors to play their football. As previously mentioned, this game was extraordinarily important for the club, what more could possibly encourage fans to get behind their team? A free plastic flag to wave during the game? Is this really going to make a difference? 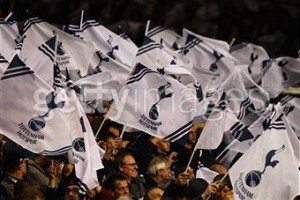 If the flags are not provided to generate atmosphere then maybe it is to create a visual spectacle to inspire the players? After all some of the most iconic images within football come from the stands that are now world famous for their visual grandeur. Some of the stadiums in South America most notably Boca Juniors and River Plate create majestic looking display with streamers and banners. Another is the Kop at Anfield where the fans hold their scarves and banners high for example. In these instances, it is easy to see how the players could be inspired by their fans displays but I fail to see how the flags provided by the club at a lot of games could have the same effect as these timeless traditions.

Often when an English team has such a high profile game fans bring their own flags which they have spent time and effort making, adding their own unique touches and slogans, and proceed to decorate the stadium with them, creating a traditional and authentic demonstration of support. In comparison to these original displays, I think these flags provided by the clubs hierarchy look plastic (forgive the pun), cheap and tacky. Some of the best nights at football games in this country, such as the Manchester United vs. Barcelona or the first Liverpool vs. Chelsea Champions League semi-final clashes didn’t require any kind of props handed out by club officials. Ultimately it is the fans make the atmosphere.

This of course is not a jibe at the Tottenham fans, who as I have previously stated are some of the best in the country, but at those in the clubs hierarchy who feel that in order to create an atmosphere for a big game that something must be added to the raw hostile atmosphere that would no doubt be created.

The sad thing for me is that this sort of thing is becoming more and more common place. Off the top of my head I can think of Chelsea, Arsenal and Aston Villa who all have had free flags handed out to them at the start of the game before respective finals and semi-finals. Again, this is not a criticism of those fans who support those clubs. Rather it’s as if those who decide to provide the flags don’t believe that their respective fans will be able to get behind the team sufficiently, so they have to interfere; they feel they have to add something to something which realy shouldn’t need to be added to.

It all seems a bit manufactured, which is the last thing I personally want to see in football.