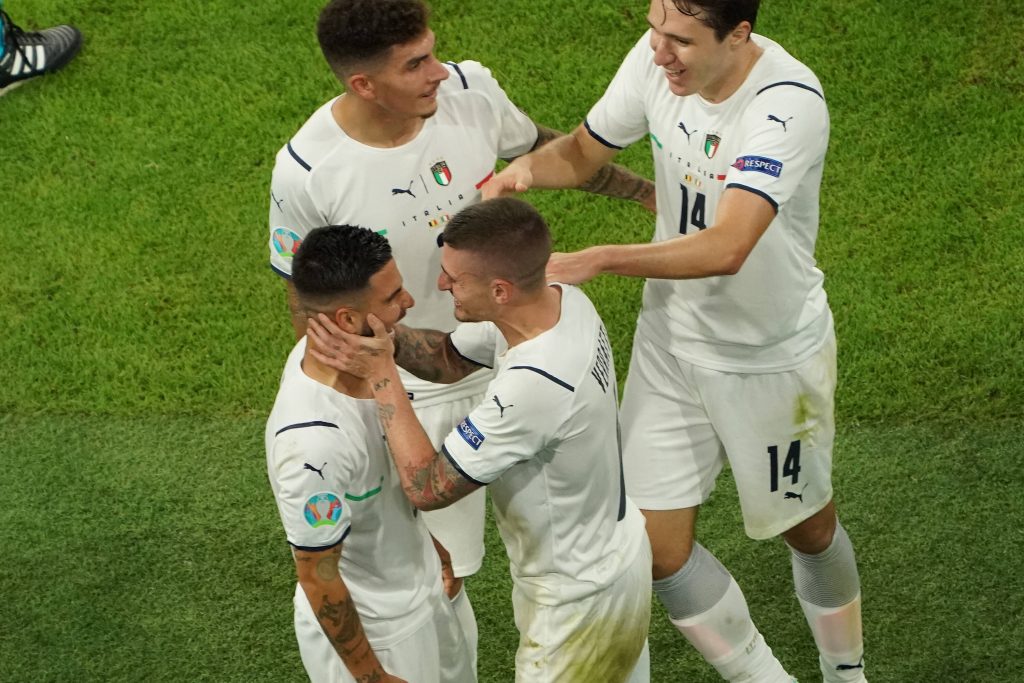 Italy and Spain will go head-to-head at Wembley Stadium on Tuesday night in a mouth-watering Euro 2020 semi-final showdown.

Italy’s road to redemption at Euro 2020 has seen them top Group A with all three victories and oust Austria and Belgium in the first two knockout rounds.

By contrast, the Spaniards may be tired heading into this meeting after failing to negotiate their previous knockout fixtures inside the 90 minutes.

Italy needed extra time to squeak through to the quarter-finals, where it took them just 45 minutes to overcome the world’s best-ranked nation Belgium and reach their first Euro semi-finals since 2012.

Interestingly, only Germany (20) have qualified for more major tournament semi-finals than Italy (12), with the Italians progressing into the final nine times in their previous 11 attempts.

Extra-time included, Roberto Mancini’s men remain the only team to win all five matches at Euro 2020.

They look to become the second European nation to win the first six games within a major tournament since the Netherlands in the 2010 World Cup.

However, it could be an ill omen, as the Oranje lost that final to Spain.

Nicolo Barella and Lorenzo Insigne both opened their Euro accounts last time out, with their first-half strikes against Belgium seeing Italy score before half-time in three of their previous four Euro outings.

However, Mancini’s side paid a heavy price in the quarter-finals, as Roma’s Leonardo Spinazzola suffered an Achilles tendon rupture that will keep him out of action for months.

Out-of-favour Chelsea left-back Emerson Palmieri could replace Spinazzola at Wembley, which would be his first Euro 2020 start since Matchday 3.

Spain survived a penalty shoot-out drama against Switzerland in the quarter-finals to set up their first major tournament semi-final appearance since lifting the Euro crown in 2012.

Curiously, the Spaniards have now progressed via penalties on more occasions than any other European nation, doing so four times at the European Championships.

La Furia Roja also boast a 100% record in the Euro semi-finals, having gone on to win the title the last two times they reached the final four.

Adding to their confidence, Spain have lost just one of their last five matches at Wembley (W2, D2).

However, their most recent Euro knock-out stage fixture at this venue resulted in a penalty shoot-out elimination to England in 1996.

Despite having Alvaro Morata, Gerard Moreno and Ferran Torres in the front third, Luis Enrique’s men have benefited from more own goals (three) this summer than any other nation in Euro history.

Manchester City winger has racked up two goals and one assist in his last three games at Euro 2020, starting both of Spain’s knock-out stage contests.

Aymeric Laporte has also been an ever-present figure for Enrique’s side at the tournament, having played every single minute of Euro 2020 action so far.

But the third City star, Rodri, has lost his place in the starting line-up following Sergio Busquets’ return to the fold and is unlikely to start against Italy on Tuesday.

Despite heading into proceedings amid a purple patch, Italy will be concerned about beating Spain just twice in their last 14 meetings across all competitions (D7, L5).

By contrast, Gli Azzurri have suffered just one defeat in their nine major tournament encounters against La Furia Roja (W4, D4), running out 2-0 victors in their most recent such contest back at Euro 2016.

The Italians have since met Spain twice in competitive matches, drawing 1-1 in a World Cup qualifier in October 2016 before going down 3-0 in the return leg in September 2017.