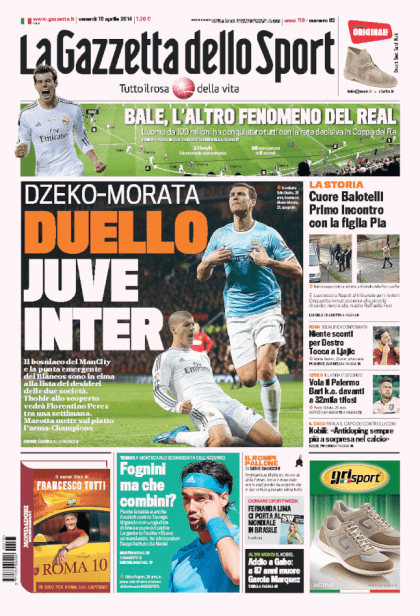 New Inter Milan President Erik Thohir has already confirmed that the Nerazzurri are looking to bring in a leading striker in the summer, with Dzeko and Fernando Torres from Chelsea being the prime targets.

However, fresh reports from Italy have now confirmed that Juventus have also now joined the race for Dzeko, whose future at the Etihad looks uncertain beyond the summer. It is believed that Old Lady manager Antonio Conte is desperate to mount a challenge with his side in next season’s Champions League and has identified that the Bosnian will fill his team perfectly.

While Dzeko has started for Manuel Pellegrini’s side over the last couple of months, but its well known that the 28 year old is the third choice striker behind Sergio Aguero and Alvaro Negredo in the pecking order.

Dzeko will have just one year remaining on his £150,000 a week deal in the summer and both the Italian clubs are desperate to land him before the World Cup. He will lead Bosnia and Herzegovina in Brazil and a good show in Sambaland will surely raise his stock further.

What do you think? Should Dzeko sign a new contract at City? Or will either of the Italian clubs grab him in the summer?