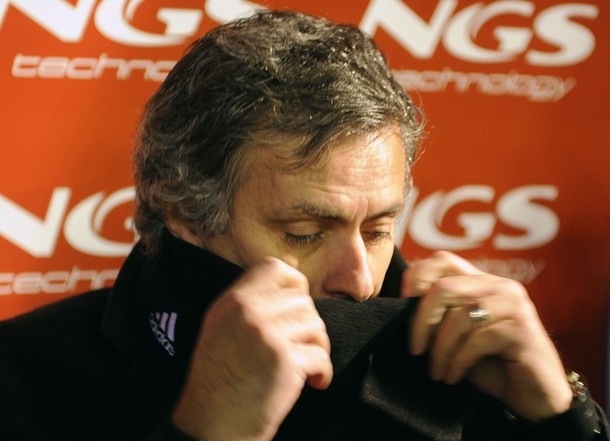 Jose Mourinho looked a shell of the man we have either came to love or loathe in the last seven years as he stood aside in his technical area in Pamplona Sunday night and witnessed his Madrid master plan seemingly blow up in smoke.

The special one was helpless to resist yet another slip up in as many weeks that has derailed his hopes of dashing the dream of a Barcelona side that is continuously getting better and better – seemingly unstoppable in their quest for domestic and European domination.

The defeat to Osasuna was another example of Real’s stuttering form since the turn of the year, having drop points at lowly Almeria and having to come from behind twice to defeat an impressive Villarreal at the Santiago Bernabeu. Mourinho has always expressed the need for his squad to be strengthened, in particular in the full-back area and most predominantly in attack. The injury to Gonzalo Higuain ruling him out for the rest of the season had led to the Blancos coach having to utilise a Karim Benzema with low self esteem and confidence. To the credit of the Frenchman he has done relatively well, scoring a hat-trick in the progress, but the dependability resting on his shoulders week in week out hasn’t fulfilled his coach with great optimism.

Real lacked a cutting edge at the weekend and they have done for the last few weeks. There is an evident sign of tired legs and weary muscles and even the phenomenon that is Cristiano Ronaldo was unable to prevent their downfall. Should the recent mishaps be put at the door of Mr Mourinho? Absolutely not.

His relationship with General Manager Jorge Valdano has deteriorated at a rapid pace in the last few months. In truth their relationship never really got off the ground, both having a public dislike towards one another prior to Jose’s arrival from Inter. Valdano was a common critic of the Portuguese tactician, lambasting his negative football and attitude. Mourinho’s arrival with Valdano sat beside him during his inaugural press conference as coach of the Whites indicated that all was rosy in the Madrid garden with a blossoming handshake – or so it seemed.

What has really discouraged Jose with the policy at Madrid is the club’s objection to his ideas in the transfer market. He has constantly stressed his need for a striker and seemed to be fighting a lost cause only for the hierarchies to lure Emmanuel Adebayor on loan for the rest of the season. Mourinho had to force the hand of his employers who didn’t see the need to bring anyone in believing their coach could make do with the squad at his disposal as he did with Inter. The same eleven has more or less picked itself since the end of August and fatigue has clearly set in with a distinct lack of sharpness in the Madrid rank.

Jose’s body language on Sunday was a telling sign. The charismatic swagger and the distinct presence on the touchline was cascaded with caution and despondence. He stood with an ashen look, hands in pockets, face burrowed in snood, portraying little emotion. Even when his side went 1-0 down he opted to throw on all three of his substitutes in one swing and it blew up in his face. It was if he was that fed up himself he was resigned to defeat and threw all his eggs in one basket. Mannerisms of an on watching President Florentino Perez told its own story with the stern faced Spaniard sitting cross-legged, arms folded and a look of disgust.

Life in Spain is not one of pleasure for the special one. He has had to cover his mouth whilst speaking on the touchline in fear of being quoted, baffled by the comments of fellow coaches and most importantly proclaiming his desire to return to England. The 48-year old is just not relishing his time in Spain with the biggest club in the world. What comes with Real Madrid is a club with immense pressure and constant scrutiny. Jose, in no doubt is the perfect fit for the club and he will bring success but Valdano and company must understand that this a progressing project and even Jose cannot build Rome in a day.

Madrid and the elite of Europe are up against an entity in Barcelona who are on course of creating a dynasty similar to that of Real in the fifties, Liverpool in the eighties and Milan in the nineties – Barca are entering that calibre as we speak. They are just seemingly unstoppable and their methodology and philosophy can only be revered by the rest of the world – including bitter adversaries Real Madrid.

La Liga success may be beyond the Whites this term but they still have a big say in the Copa del Rey – booking their place in the final where they will met Pep Guardiola’s side – and the Champions League. If they end up at the end of the season with a piece of silverware then no doubt Mourinho’s inaugural season will have been a success. Whether or not it will be his first and last, we’ll have to see.