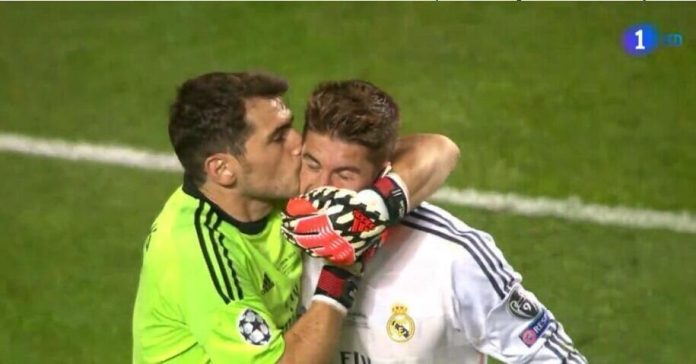 All praise to Atletico Madrid on a magnificent season, topping the mighty Barcelona and Real Madrid in La Liga, securing the league title 3 points clear of both of the usual Spanish powerhouses. Despite scoring vastly less goals as a team, Atletico did have Diego Costa hitting the back of the net at the same prolific rate as the legendary Lionel Messi for Barca. They also managed to win one more game than both and lose one less during the season.

So going into today’s final they were not your usual ‘underdogs’.

Despite these factors though, Real were seen as the favorites going into the game. It began pretty even, with Real attacking with more ferocity and pace but Atletico defending very strongly as well as moving the ball around with great confidence and skill in the middle of the park.

Then with 36 minutes gone Godin found the net under very bizarre circumstances. Iker Casillas is well known for committing the odd ‘howler’ from time to time, his excellent shot stopping skills making up for his occasional moments of madness (albeit not quite to the standards of Rene Higuita!), but this was surely the time and place for him to play it safe.

As the ball came in to the box from a looping header, Casillas came running out to the ball despite there being no imaginable way it had his name on it, and Godin got his head to the ball and it was enough to beat Casillas in the no-mans-land he had wandered into. It wasn’t even clear that Godin was even going for goal, maybe just trying to flick the ball on, but luck was on his side and a near-empty net lay 10 yards behind him. Casillas dashed back at an impressive pace and very nearly scooped the ball away, but it had already crossed the line. His efforts would’ve been fruitless anyway as it was merely thrust at Raul Garcia and into the net. But the goal was clearly Godin’s and the blame was clearly on Casillas.

Atletico stood strong and withstood many waves of pressure from Real’s blistering attack force over the next 57 minutes and it wasn’t until 3 minutes deep into the 5 minutes of added time at the end of the 90, with the Champions League trophy within touching distance, that Atletico conceded the equalizer.

Sergio Ramos managed to outleap and undo a defense that had every right to be extremely proud of themselves, in the dying minutes, and took the game to extra time. The appreciation for Ramos was evident from Casillas when he landed a great big smacker on the Spanish defender’s cheek.

Extra time proved to be a different game, with Atletico exhausted from Real’s ruthless and relentless dominance and attacking play, and the game ended 4-1 to the boys in white but despite the final score, Atletico should stand proud with what they have achieved this season.