Hazard wants Costa back at Chelsea, but return to Atletico will happen 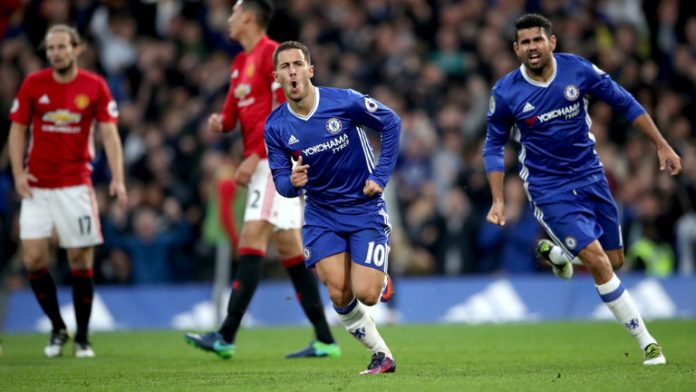 Eden Hazard wants Diego Costa to end his self-imposed exile and return to Chelsea, but it’s simply not going to happen.

Costa has been absent from the Blues since failing to report back for pre-season training in July and was left out of their Champions League squad on Monday.

The 28-year-old has expressed his desire to return to former club Atletico Madrid, but the Spanish outfit only offered £25 million – half of the fee demanded by Chelsea.

“Diego and I have been playing together for three years, we have won everything together except for the Champions League,” Hazard told Marca.

“It’s a pleasure to play with him, he’s a top player and a top person. I would like to see him come back, but I don’t make the decisions.

“I hope he can find a solution so that we can see him back on the pitch soon.”

While a reconciliation might be possible under normal circumstances, that’s not going to be the case here.

The two key figures in this issue – Costa and Chelsea boss Antonio Conte – won’t be able find any common ground.

Both are proud and passionate individuals. Costa is a particularly prickly character and the suggestion that he might lose face by returning to Stamford Bridge is just daft.

Too much has happened for a solution to be found to the situation between Costa and Conte.

Chelsea have moved on from Costa with the signing of Alvaro Morata – a striker with a better all-round game than Costa.

The Spanish striker will return to Atletico at some point – probably in the January transfer window and probably for a reduced fee.

That would be the best solution for all concerned and it’s the only likely outcome to this saga.