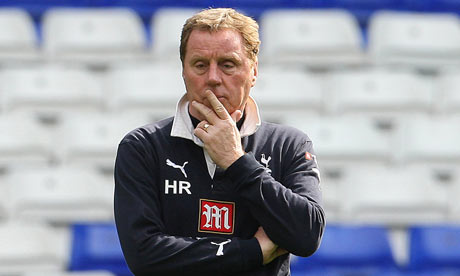 In the space of seven days, Tottenham Hotspur’s hopes of challenging for the Premiership title were swept aside once and for all with back-to-back defeats to Arsenal and Manchester United. Whilst injuries undoubtedly robbed boss Harry Redknapp of the chance to field his best eleven, his inexperience of managing in such high-profile games showed in his approach to both games.

Going into this game Arsenal were not in great form. They had lost their previous two games, having been dumped out of the FA Cup at Sunderland and slaughtered by Milan in the San Siro. This perhaps led to Tottenham underestimating an Arsenal side that is still a match for anyone on their day. Tottenham’s back four picked itself in front of the excellent Brad Friedel.

Further forward, Aaron Lennon was only fit enough for a place on the bench meaning Niko Kranjcar started on the right of midfield. And Redknapp opted for two out-and-out strikers in Louis Saha and ex-Arsenal man Adebayor.

In the important games between top sides, teams rarely go to The Emirates and play with two out-and-out strikers. Arsenal must look forward to teams coming to play them with a flat 4-4-2 formation. It leads to Arsenal being able to use their 3-man central midfield to overrun the opposition and dominate possession. That is exactly what happened here, despite Spurs taking an early lead through a deflected Saha shot and a debatable penalty converted by Adebayor.

Harry did recognise and try to rectify the mistake by making a double substitution at half time and changing shape to a 4-4-1-1 set-up as shown below. But by then it was too late. Arsenal had already fought back after pouring forward as the first half progressed. By the time the change was made, Arsenal had already built up the momentum that gave the team a renewed confidence and sense of belief. Tottenham could have done a lot more to lessen the threat of Arsenal whilst still posing a threat of their own.

How Spurs lined up in the first half vs Arsenal:

How Spurs lined up in the second half vs Arsenal (the system they should have started with):

Seven days after the defeat to Arsenal, came a chance to get back on track at home against the reigning champions. This time injury ruled out Bale and van der Vaart. The influential Scott Parker was ruled out due to suspension after his late red card at The Emirates. Redknapp again lined up in a 4-4-2 formation with the two out-and-out forwards. Even at home, it would have been wise to make sure that the midfield area was bolstered with numbers to compensate for the quality missing from that area of the pitch. Modric was deployed on the left with Sandro and the inexperienced Jake Livermore operating in the middle. Against a team as strong as United, it was a lot to ask of the two lads in central midfield to line up against the experience of Carrick and Scholes knowing Rooney would also be dropping deep to make a three. It would have been hard enough for the first choice Modric and Parker. That said, Livermore and Sandro made a good fist of it and seemed to have the better of the first half. The second half, however, told a different story as Carrick and Scholes began to control the game with Rooney always available in pockets of space. Had Redknapp gone with a three in the middle (as the ‘big 4’ traditionally do against each other) they could have prevented themselves being caught on the counter attack so often and in turn controlled the game with more quality possession.

How Spurs lined up vs Manchester United:

The system Spurs should have lined up with vs Manchester United (strength in numbers compensating for midfield injuries/suspensions):

Tottenham now have no chance of winning the league. The best they can hope for is 3rd place, which they should be more than capable of doing with Chelsea faltering and Arsenal now playing catch-up. Keeping their best players and adding one or two in the summer could mean they are able to mount a serious challenge next season.

Not ready for England?

If the national newspapers and the media pundits are anything to go by, it is a matter of ‘when’, rather than ‘if’, Harry Redknapp becomes England Manager. But while he is still making mistakes and learning how to manage games of high importance, maybe the time is not yet right for him to take the job. He would surely be better served having a couple more years at Tottenham learning and broadening his tactical horizons, improving along the way as he takes them on another inevitable Champions League adventure next season.

Remember, Kevin Keegan was a great motivator who had his club side playing lovely attacking football, but on the international stage he was found out to be very tactically naïve. Redknapp now appears to be the popular choice, as Keegan was then, to be the next England Manager. The question remains if he has enough tactical awareness to manage at the highest level, where the press will be very quick to turn on him if things don’t go well.