Some say that variety is the spice of life – although considering that the people saying that sort of stuff either have their balls slapping against a goat’s behind or some such perversion, it’s probably best not to follow such people blindly.

I prefer to think that stupid people are the spice of life – you can point and laugh without wanting to chop something off and if you’re clever about it you come off looking like the smart one (as long as you can disguise the coke snorting out of your nose by … oh, never mind).

Here’s one such example. Last Sunday, in a Colombian league match between Santa Fe and Real Cartegena, Santa Fe striker Leider Preciado celebrated his 100th career goal by running up close to his home fans, grabbing his genitalia and shouting insults at them. His teammates restrained him, although I don’t think he would have climbed into the crowd and done his ‘want to kick these?’ routine in the faces of hundreds of football-crazy people (then again, you can’t say much about the emotional / mental stability of someone who taunts his home fans).

So why did Leider find it fitting to burn the image of him grabbing and groping in the minds of football fans the world over? The insults were apparently directed towards Henry Cruz, one of the club owners that had severely criticized Preciado for being late to a practice session. Preciado later said he was sorry:

“I humbly apologize to all the supporters of Santa Fé. The truth is that sometimes an athlete will get carried away by enthusiasm, and may sometimes do things to release all the anger trapped in his body”.

Bollocks, I say. He just wanted to play grab-ball and found out none of his teammates were interested, so he turned it into a celebration. I can’t say I fault his methods for wanting to release all the “anger” that’s trapped inside him, but did he really have to do it to his home fans? 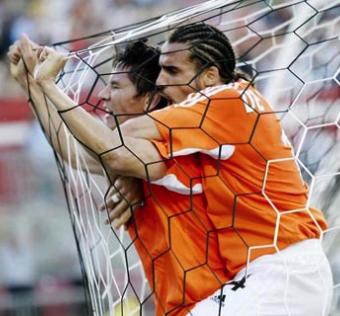 Today’s Question: What is the craziest / wackiest goal celebration that you’ve seen? Drop the video links in the comments please.

Bonus: Listen to ‘Grab my Shaft’ by Louie Austen. Use Limewire or something.

Hat tip: Marco at mCalcio blog, who wrote it up first.