Barring an almighty flop, England will qualify for Euro 2012. They’ll do so in marginally convincing fashion, maybe even topping a group which while not robust, provided more challenging than first thought. Now, England manager Fabio Capello said he knew Tuesday’s performance against Wales would be sub-par from watching the players warm up.

No-one’s championing the current incarnation of the Three Lions as potential champions. Journalists and pundits alike admit their faith has been misplaced in the past and refuse to be fooled into again predicting glory for Blighty because, well, there’s no reason to.

England’s “golden generation” is marking out the last days of an ultimately disappointing series of International careers. This qualifying campaign is likely to be their last. The next major tournament, Euro 2012, will also probably be their last. They’ll probably lose that tournament too, because Spain, Germany and the Netherlands are just that good. Winning won’t be the only way the tournament is considered a success – even a fighting semi-final loss could be seen as progress.

They also won’t win because of the simple fact England will not win anything until their Golden Generation has been removed almost entirely from the International picture. They have been enabled by Fabio Capello, who after insisting upon his appointment he would pick the best and most in-form players, has reneged and opted for the same old.

Given his reluctance to play England’s best goalkeeper at the World Cup due to a self-inflicted lack of competitive experience, this means should the Italian actually want to win the European Football Championships, he should drop the ageing stalwarts of England’s calamitous noughties. If he fears the consequences of playing untested players in major competitions, he should blood them now and embrace the possibilities ofered by English youth.

Perhaps he has started to do so already – through it’s unclear whether through necessity or choice. Joe Hart is unquestionably the best ‘keeper in England, if not one of the top five in world football. Gary Cahill looks almost certain to usurp Rio Ferdinand’s position alongside the GG’s leader, John Terry. When health allows, Andy Carroll and Jack Wilshere are the vanguard of the next generation. Chris Smalling’s debut at right-back was impressive last week and he coped well with Gareth Bale on Tuesday.

The world and his dog already know what the Golden Generation can – or can’t – do. If they were able to win a major championship, they would have done so already – or at least performed better. For nearly a decade England has struggled to combine their best two midfielders (Gerrard and Lampard) and boasted forwards unable to wreak the required havoc with inconsistent or inadequate supply. The Lions, while occasionally displaying flashes of individual skill, have been far less than the sum of their parts.

Although the season is young, the English players impressing most in the Premier League are of a different age to the current core of the team. It may be that generational change for its own sake isn’t the catalyst for change, but form. Looking th 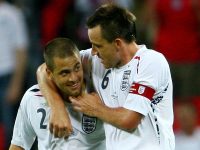 rough the International lens, these players are unburdened by numerous England let-downs and deserve a chance to grow together as a unit before the Golden Generation exits in a series of faux, enforced and never-ending retirements brought on by a Quarter-final capitulation in Poland or the Ukraine.

This is hardly a revelatory argument. Capello’s biggest contribution to English football could be to spot this fool’s gold for what it is and create a new legacy for the country with a generation whose players could become (or already are) World Class, led by Hart, Smalling, Wilshere, Phil Jones and (gasp!) even Carroll. It is time to forcibly – and perhaps conspicuously and even painfully – retire those English player who have proven themselves ineffective on the International stage.

When winning is at stake, there is little room for sentiment.

Matthew Wood contributes regularly to Soccerlens.  You can find more of his analysis and commentary at Balanced Sports, or follow him on Twitter @balanced_sports