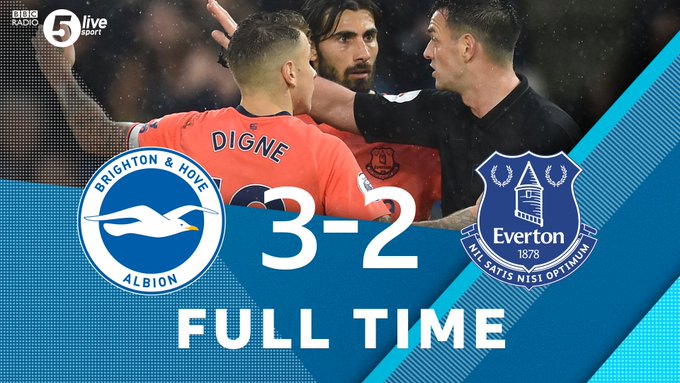 Everton suffered the third defeat in their last four Premier League after they were beaten by Brighton today at the Amex Stadium.

The Toffees suffered a 3-2 defeat against Brighton. Lucas Digne scored an own goal in injury time, while a controversial penalty decision awarded to the home side meant Everton suffered their sixth defeat of the season.

Pascal Gross gave the home side the lead with a superb free-kick early in the first half, but Everton levelled quickly through Adam Webster’s own goal.

Dominic Calvert-Lewin scored within minutes of coming on to give Everton the lead. However, just three minutes later, the video assistant referee (VAR) ruled Aaron Connolly had been fouled in the box – a controversial decision that has been criticised by football pundits.

Popular pundits Gary Lineker and Michael Owen took to Twitter express their reaction on the decision.

VAR hasn’t given a penalty this season, finally gives one to Brighton for next to nothing. The bar that has been at pole vault heights has descended to limbo dancing levels. 🤦🏻‍♂️🤷🏼‍♂️

Oh no!🙈
I’m an advocate of VAR but that’s never a penalty in a million years, let alone worthy of being a ‘clear and obvious mistake’ that should result in a penalty. #BRIvEVE

Neal Maupay scored from the penalty spot to level the score. It was also the first penalty awarded in the Premier League by VAR that the referee had not initially given.

Brighton enjoyed 55% of possession, and registered four shots on target during the game, according to BBC Sport. They have moved to 12th in the Premier League table as a result of the win against the Toffees.