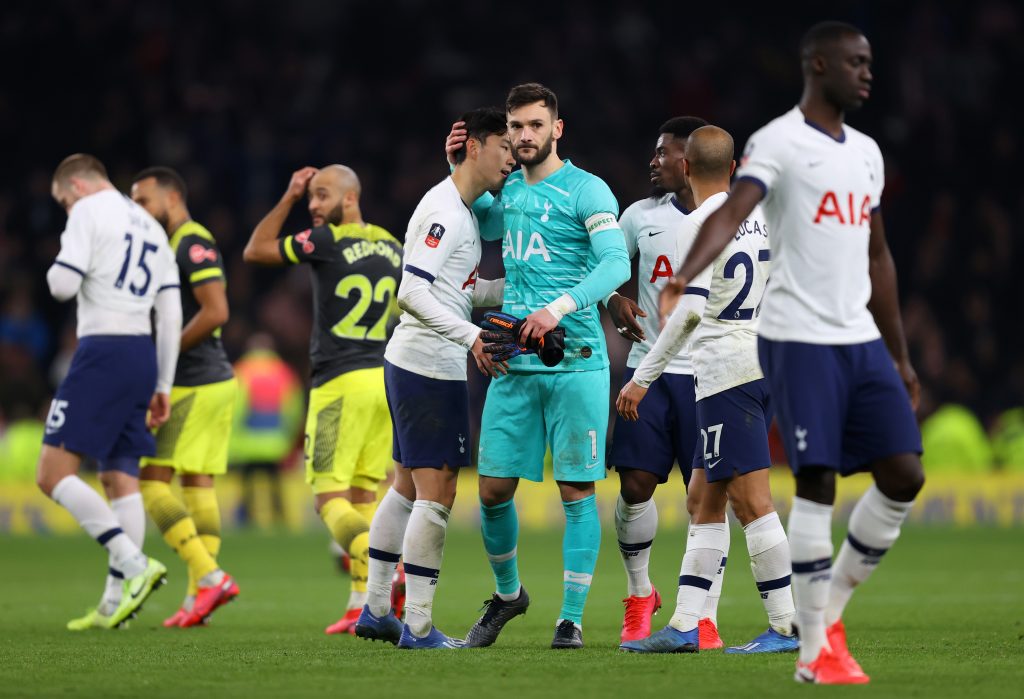 Tottenham Hotspur kept their hopes of playing European football next term alive after securing a 1-0 win over Everton last night thanks to an own goal from Michael Keane in the first-half.

It marked a 200th Premier League victory for Spurs boss Jose Mourinho, but it was the row between his goalkeeper Hugo Lloris and forward Son Heung-min at half-time that caught everyone’s attention.

Hugo Lloris and Son Heung-min have to be separated by their teammates as they make their way off the pitch at half-time! 🤬

Watch the second half live on Sky Sports PL! 📺 pic.twitter.com/pw7l8fklBg

The Tottenham duo had to be separated by teammates but they quickly made up in the tunnel before the game restarted and were also seen hugging after the final whistle.

Hugo Lloris & Son hugging before the second half, all is forgiven 🤣 pic.twitter.com/OHKAFjQNGD

Hugo Lloris & Son at full-time hugging it out after their half-time fight pic.twitter.com/t3yBkIFaOw

Mourinho tagged the bust-up “beautiful”, and BBC Match of the Day presenter Gary Lineker reckoned it happened because they care, reacting thus to it on Twitter:

Good heavens, Son and Lloris having to be kept apart. Of all the players out there who might want to scrap, I wouldn’t have picked those two. Shows they care, I suppose.

Sky Sports making a big deal out of the row didn’t go down well with Tottenham legend Graham Roberts, and he reacted thus:

Jesus sky making a huge deal out of a small disagreement on pitch honestly happens every single training session when I played. 🤦‍♂️

The French goalkeeper explained the reason for his row with the South Korean afterwards, claiming he was annoyed with Son’s refusal to track back and help make a press minutes before halftime.

🗣 "It belongs to the changing room, I was annoyed but it's part of football"

Hugo Lloris on the half-time fight with Son pic.twitter.com/8162VySiLd

“There is no problem at all, you could see after the game we were fine. I think to concede a chance six seconds before half-time because we didn’t make a press annoyed me but yeah, that’s football.”

The Spurs duo did the right thing by quickly showing that they have moved on, and Mourinho will hope to see them channel that passion into the remaining games as they chase a top-five finish despite being seven points behind Manchester United with five games remaining.