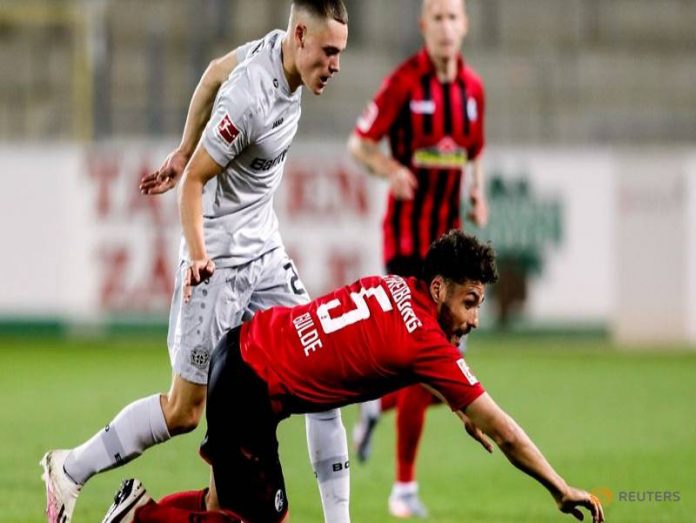 Leverkusen visited Freiburg, with both sides hunting for European spots. Leverkusen knew that with a win they could move up to third in the Bundesliga table.

The away side dominated possession in the first half but neither side could get a shot on target. There were no great chances either, except one for Höler, who was through on goal, but ended up missing wide.

The second half was far more open after Havertz got his record-breaking 35th goal, when Bailey played him through after some brilliant hold-up play.

Pedersen had a chance late on when Günter delivered an underwhelming cross after he was played through by Heintz, but he was denied by Hrádecký.

In the end, neither side could do much to create a chance, and it ended 0-1 to Leverkusen, with both sides having a solitary shot on target.

Leverkusen reverted to a back 3 after their back 4 shipped a goal for each defender in midweek. The back 3 was solid as always.

Leverkusen looked to keep possession, pressing the Freiburg when they lost the ball. The visitors enjoyed more possession for most of the match, as Freiburg looked to hit on the break. Their main threat came from set-pieces. And just like Wolfsburg did in midweek, they minimised the space between their defence and midfield, making it difficult for Leverkusen to play through them.

Leverkusen switched to a back 4 to preserve their lead later on, but as we learnt in midweek, it only made them more vulnerable. Luckily, they were able to hold on.

Alexander Schwolow – Didn’t have too much to do, and he can’t really be blamed for the goal. 6.75.

Lukas Kübler – Did alright to contain Bailey as best as he could, but he did let him through a few times. 5.5.

Philipp Lienhart – Had a decent game in defence, and did well to keep Havertz in check. 6.5.

Dominique Heintz – His distribution was good, and he was decent at the back too. 6.25.

Christian Günter – Had a decent match, and a brilliant chance late on, but his pass let him down. 6.

Roland Sallai – He was decent in midfield, but he could not do much to impact the game. 5.25.

Nicolas Höfler – Not overly involved in the match. 5.

Vincenzo Grifo – Most lively in the Freiburg midfield. Almost set up a goal when he played Höler through with an entire postcode for himself. 6.5.

Nils Petersen – Couldn’t do much in attack, but his defensive headers were important. 5.5.

Lucas Höler – Couldn’t do much up front. Had a great chance late on in the first half, but he put it wide.  4.5.

Jonathan Schmid – The best player in midfield since he came on,  and almost got a goal when his deflected shot went just wide of the post. 6.75.

Team – Freiburg were perfectly set up to frustrate the visitors. They made the match a cagey affair, and did well too contain Leverkusen. They had one big chance each at the end of either half, and only allowed one for Leverkusen (which was the goal), but their failure to convert cost them. Their performance was not bad, though. 6.75.

Lukáš Hrádecký – Got his first clean sheet after the enforced break, and earned it with a couple of great saves. 7.25.

Jonathan Tah – Strong at the back, and occasionally forayed forward to help his side. 7.

Sven Bender – Another solid performance from him in defence, and his aerial threat made him the most dangerous player for Leverkusen in the first half. 7.

Aleksandar Dragović – Strong showing from him, as he was great in defence. 6.75.

Nadiem Amiri – Very lively down the right, as he adapted to his wing-back role. His runs were threatening too, and drew lots of fouls. 7.

Charles Aránguiz – Lively in the middle of the park, but couldn’t make too much happen at either end of the pitch. 6.5.

Julian Baumgartlinger – He was very good in defensive midfield, as his interceptions and challenges broke Freiburg’s attacks down. 6.75.

Daley Sinkgraven – He was decent down the left wing, as he got forward often, and delivered a few crosses. 6.

Florian Wirtz – He was heavily involved throughout the match, and his silky feet caused lots of problems for Freiburg. 7.

Kai Havertz – Yet again he dropped deep to support the attack. Got his 35th Bundesliga goal with a great finish. 7.25.

Leon Bailey – He threatened with his trickery on the ball, but his reluctance to shoot cost him. Did very well to get the assist for Havertz, though. 7.25.

Lucas Alario – Not overly involved since he came on. 5.

Moussa Diaby – Decent down the right, as he kept the Freiburg defence on their toes with his pace. 5.75.

Team – Leverkusen were the better side for 80 minutes, and they created only one major chance which they took. Freiburg made it a very tense match, but Leverkusen did well to keep it clean at the back – getting their first clean sheet after the restart. Decent showing overall. 7.

Leverkusen move up to third in the Bundesliga table, with a great boost to their European hopes. If they can keep playing like this, they will surely qualify for it.

Freiburg stay eighth, and could drop to ninth after Hertha play. Their European dream may well be dead and buried, because they are 4 points behind Wolfsburg (who have a game in hand), but they won’t be too disappointed with their season.