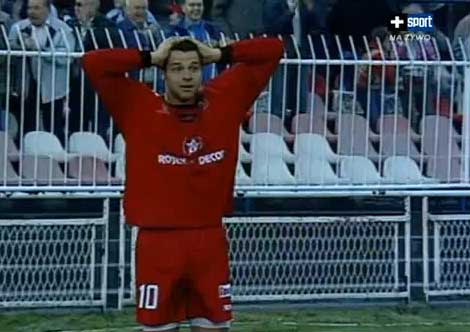 The modern game’s professionalism is based around thorough tactical preparation, strict conditioning of elite athletes and rigorous research on opponents, with the game at the highest level decided by small margins.
Matches and seasons can be concluded one way or the other by a single incident, but sometimes a decisive goal can be based around luck more than skill. The scoring team is happy to have fortune on their side, whilst the side conceding the goal curses their bad luck.

Sometimes deflections can happen, with a bit of bad luck wrong-footing your goalkeeper. However, this goal for Gorzow Wielkopolski against Wisla Krakow baffles beyond belief.

A manager will always have a game-plan for his team, with all eventualities considered. However, some things, you can’t control, as Tim Flowers finds out here. Paul Robinson and Ian Walker have suffered similar misfortunes also in the past.

In this clip the woodwork was determined to keep mercurial Brazil from scoring against hapless Poland. However persistence pays of, as Roberto Dinamite finally finds the back of the net.

He’s behind you! Nani takes advantage of a lapse in concentration from Tottenham keeper Heurelho Gomes to score at Old Trafford. Dion Dublin scored a similar effort for Coventry ten years earlier.

One of the few remaining courtesies in the game of football is returning the ball to the opposition after it has been put it out of play when a player is injured. Ajax defender Jan Vertonghen tries to do just that, but ends up with a one in a million goal.

On a blustery night at Goodison Park, Tim Howard’s long ball forward proved too much for Bolton goalkeeper Adam Bodgan, and resulted in a freak goal. Howard later admitted to being on the receiving end of a similar effort earlier in his career, and Paul Robinson also scored a comparable goal in his Tottenham days.

Darren Anderton had luck on his side in his strike against Sweden, as a goalkeeper and both posts couldn’t stop him from finding the back of the net.

An old adage of the game is to play until you hear the whistle; Iceland were already 4-0 down against Scandinavian rivals Sweden when his happened:

Communication is a key part of the game, especially in defence – however both goalkeeper and defender are culpable of ignoring that (and each other) is Tolgay Ozbey’s goal for the East Bengal.

Former Roselare stopper Jurgen Sierens does well to stop a long distance strike against Belgian giants Anderlecht, but then loses his bearings slightly…

Some things just can’t be explained in football, and if something similar to this happens to your team, you better laugh or you will cry.