In the run up to every World Cup there are certain inevitabilities that are so predictable, you can almost set your watch by them.

Every other television commercial will start to contain tedious tournament tie-ins (Anusolve – the official haemorrhoid cream of SA2010), hundreds of god-awful nick-nacky songs (official and otherwise) will be released in support of whomever, Michel Platini will stun the world by backing England and finally, the goalkeepers will start to get there excuses in early by criticising the new official ball.

First out of the blocks this year is France’s highly-rated stopper Hugo Lloris who has branded the new Adidas Jabulani ‘a disaster’, also admitting his fear of being made to look like a amateur by the behaviour of the latest World Cup ball. 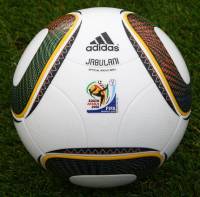 “This ball is a disaster. We played with it in the Coupe de France this winter. We must get used to it.

All goalkeepers will be well under pressure. We will each share of madness. In fact, I don’t ask myself this question. I just know that with this kind of ball they can score from anywhere.

What is strange is that these balls, when they are in the air, may very well never come down, or they could descend very quickly.

[Goalkeepers] must be constantly alert, constantly analyzing. This position requires it, but we will have to be even more concentrated.

Prior to the late 1990s, the balls were very heavy and goalkeepers could block them. Now, we can only be as effective as possible, be in opposition, because they are too fast and are constantly changing direction.”

The Jabulani is said to be ‘the roundest ball ever produced’, following months of development at the Sports Science laboratories at Loughborough University in England.