Could this turn out to be the biggest transfer saga in the summer? French giants Paris Saint Germain are thought to be a keen admirer of Eden Hazard and they want the Belgian back at Ligue 1 next summer. 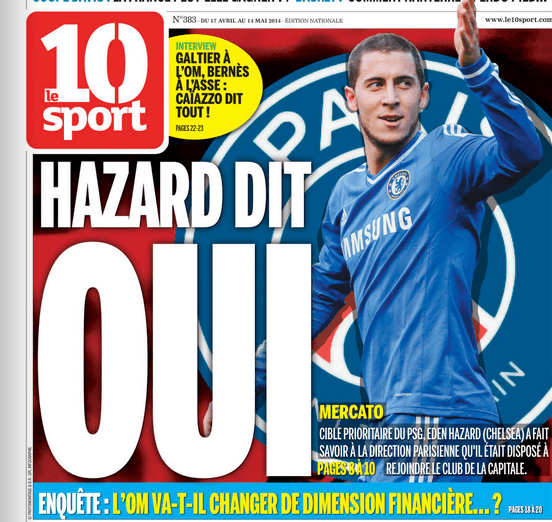 PSG had made no secrets of their desire to sign Hazard, with midfielder Yohan Cabaye, who was a team mate of hazard during their Lille days, said back in March, he would love to see the Belgium superstar to join Parc des Princes.

Chelsea boss Jose Mourinho came with a sharp riposte, claiming with financial clout hovering over PSG, they cannot forget about signing Hazard and Oscar, lest, they have to pay around £300m to secure their services. 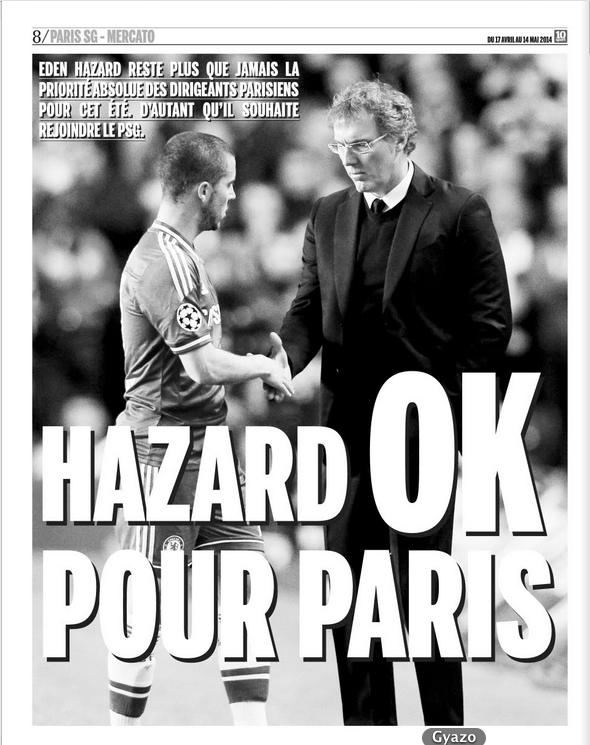 Hazard made some comments following Chelsea’s 3-1 defeat against Atletico Madrid semi-final in the Champions League, that created brouhaha in the media. The Belgian commented on the tactics of Mourinho and allegedly claimed the Portuguese is one of the worst managers he has seen.

This was followed by Jose Mourinho’s comments where he blamed Hazard for the opening goal of Atletico and harshly claimed the player doesn’t sacrifice 100 per cent for the team.

We can feel that a tension is brewing here. Now Le 10 sport reports that PSG’s main target for this summer is Hazard. He has been identified as the player who could give PSG what they’re lacking at the moment, a creative winger with the ability to score many goals. Only Menez has that profile currently in the team and he will be out in the summer. Edinson Cavani and Lucas Moura have been tried there but they’re not natural wingers and have the tendency to drift to the centre.

Hazard has informed PSG that he’s ok to go there, presumably the wages proposed by PSG playing a role there. It’s not certain, however, that Chelsea will be as willing to do business here.

PSG’s plan to get Chelsea to sell Hazard is to include Cavani in the deal, which could convince Mourinho and Abramovich to sell the Belgian. They feel it will be a good deal as Chelsea need a forward and Cavani is fed up of playing on the right at PSG.

The problem with this is that Chelsea might have already wrapped up a deal for Diego Costa or he might be their first priority, in which case it’s not definite that Moruinho would want Cavani, although with Torres and Eto’o on the way out it could be possible.