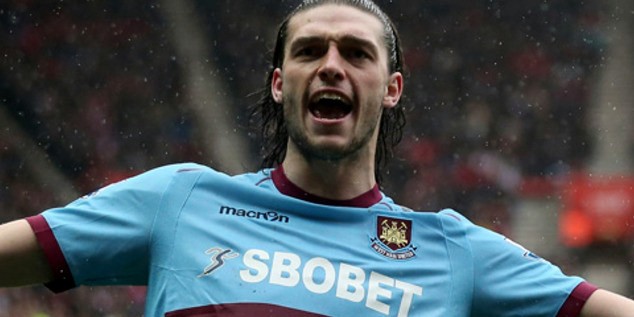 Andy Carroll was signed by former Liverpool manager Kenny Dalglish for a club-record fee of £35m in January 2011 from Newcastle United.

However, after 18 disastrous months, where he failed to justify his price-tag, he was sold to West Ham for £15m (plus £2m initial loan fee).

Dalglish gave Carroll a fair chance to prove himself with his direct style of play but Rodgers found him unsuitable in his death-by-football system. as he lacked the necessary pace, fluency and technique, the new system demands.

Liverpool went to the top of the league after demolishing Tottenham 4-0 at Anfield on Sunday after both Chelsea and Manchester City dropped points but Andy Carroll will be looking to derail his former club’s title hopes when both sides meet on Sunday at Upton Park.

It won’t be easy to stop the Premier League giants who are on an eight-match winning streak, but Carroll is eager to prove a point.

“You know, I said from the beginning that they had a great chance of winning the league,” said the 25-year-old.

“I told all the lads they would win it. They were all ifs and buts, but I turned around and just said it. They’ll back me up on that.

“I just had this feeling after they signed Daniel Sturridge, who’s a great player.

“And having played with Luiz Suarez and knowing what he’s like, having those two together, the way they connect, they’re unbelievable and look unbeatable.

“Suarez is just incredible. Even after games he wants to train,” Carroll added.

“He never stops running, never gives up and that’s infectious. That’s why all those around him are performing like they are. Liverpool are on fire right now and definitely the team to beat.”

The big Geordie insists there is no hard feelings for his former employers and does not regret his move to West Ham.

“Suarez and Sturridge up front are completely different to me.

“There’s no bitterness at all. I joined West Ham and apart from the injury setbacks, I’m loving it.

“Everything has been great and I’m feeling very good, just getting into the stride of things again.

“It’s been a frustrating season and tough at the beginning because nobody expected me to be out for as long as I was but I don’t really want to talk about that.”

While Carroll’s transfer didn’t turn out to be a hit, Liverpool fans will be very pleased to hear such nice words from their former player.