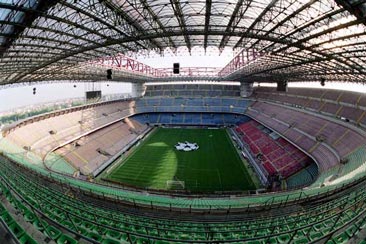 For those of you who support one of the many English Premier League teams with European aspirations this season, it’s never too early to start looking forward to the prospect of some fantastic continental away days.

So before you start changing up your travel money, digging out your passports and replacing that dreary January away match at Bolton with tickets to a slightly more exotic destination – take a look at this list of the best European cities and teams that, if the draw is kind, you could be visiting next season.

Birmingham City fans, who after their Carling Cup victory over Arsenal will be relishing the start of next season’s European campaign, should be crossing their fingers that Paris St Germain can hold onto their Europa league spot in Ligue 1 – potentially providing Brummies with an easy hop over (or under) the pond and a fantastic Parisian away day.

Not really a city that needs much selling, with Paris’s many charms well known to all, not least the ultra-convenient Eurostar rail links that will see you sitting aside the Seine sipping a pre-match latte in under 3 hours.

Slightly further a field we have Fenerbahçe, who are currently on course for a Champions League spot next season and call the Şükrü Saracoğlu Stadium in the Turkish city of Istanbul home. Aside from being able to experience the famously passionate Turkish fans first hand, you also have the beautiful city of Istanbul at your disposal.

Visit the Grand Bazaar market and spend some of that foreign currency by haggling yourself a great deal on a Turkish rug, or take a walk around the cities walls that form a 4 mile arc around the ‘old city’ district.

Although the chances are that any trip to the Nou Camp will be a sad disappointment and lesson in football for the visiting team and supporters, it’s difficult to match Barcelona when it comes to a football weekend away.

Apart from your visit to the Nou Camp, one of the most incredible stadiums in world football, you can pay a visit to the cities famous ‘las Ramblas’ or the Gaudi designed Sagrada Familia, to soak in a bit of non-football related culture.

The home of Inter and AC Milan, the San Siro is more than likely to be a destination for at least one the Premier League’s Champions League qualifiers next season and represents what will be an unforgettable away day.

Compliment the renowned atmosphere of a match at the San Siro with some more sedate activities, such as checking out the cities awe-inspiring Roman architecture or catching an opera at Milan’s famous ‘La Scala’ opera house.

What are your favourite football-related travel destinations in Europe?